TweetShareGoogle+Email
Listen
Listening...
/
Listen to the broadcast version of this interview.

More than 1,500 members of the civic group 100 Black Men of America are in Fort Lauderdale this week for the organization’s 28th annual convention.

Dennis Wright is the president of the Greater Fort Lauderdale chapter and he joined us recently to talk about the group’s efforts to mentor young, black men ages 12 to 18. 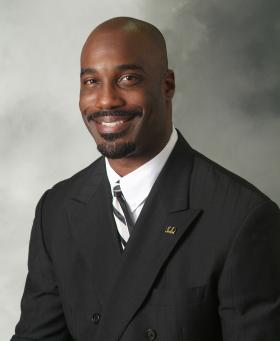 How does your mentoring program work?

The Greater Fort Lauderdale chapter has a leadership academy where we meet with the young men. We provide group mentoring every Saturday from 10 to 12. For the past 10 years we've been providing group mentoring and peer-to-peer mentoring and then that spawns one-on-one mentoring as needs require. Sometimes we actually go into the classroom. I've attended parent-teacher conferences just to make sure that the school knows we're behind that child and supporting them 100 percent.
How do the schools react to that?
It's extremely positive when you sit down with a teacher and let them know that I'm here serving as a mentor for this child, and I'm here to make sure he or she is successful.Teachers are overwhelmingly excited about that opportunity because they know that sometimes there's a struggle in the home, and the parents need that support from the community. That's what we provide. We are a source of role models for those young black males, helping them make those decisions that are critical to their overall success from an education perspective, making sure they're positive contributors to society and they grow up to be respectable young men.
Is part of your work confronting stereotypes?
Definitely, definitely, and what we do is we make the young men that we mentor aware of those stereotypes and some of the consequences that [go] along with those. So when they make decisions on how they present themselves they're fully aware of the stereotypes that exist, and they can make an informed decision on whether or not they want to present themselves in that manner.
Can you give us an example?
There was this particular young man in our leadership academy he came in every Saturday with his pants sagging. We normally tell them, 'Pull your pants up, pull your pants up.' That's short term. They'll pull them up while they're in the leadership academy, but eventually they will go down. But being a consistent role model for this young man and him seeing us being successful in not wearing our pants that way, in not presenting ourselves that way -- eventually, I got a call from his mother, who said that he told her he was no longer going to sag his pants because he wanted to be more like Mr. Wright. That meant a great deal to me because what happened there was a mindset change that happened over a period of time, and with that mindset change typically they don't go back to what they were doing before they had that change of mindset. That's very important that we as black men lead by example and show a positive image for our young black males.

Anyone interested in learning more about the 100's mentoring program, can check out the local chapter's website or call 954-519-0002.

Sixty years after the U.S. Supreme Court's decision in Brown v. Board of Education, historians and advocates say the country still has a ways to go when it comes to equality in education.

There are now three new inductees in the Florida Civil Rights Hall of Fame. They range from the author of the Black National Anthem to another who’s hailed as the “father of St. Augustine’s civil rights movement.”

Robert B. Hayling, a Tallahassee native, is one of the new inductees into the third annual Florida Civil Rights Hall of Fame. Speaking at a ceremony held in the Capitol building Wednesday, the 94-year-old recalled a time when he was much younger when it was just the Historic Capitol building.

Students and civil rights activists have asked Gov. Rick Scott to hold black and Hispanic students to a higher standard. The Southern Poverty Law Center and Dream Defenders were in Tallahassee this week to deliver a petition — with 5,800 signatures — protesting Florida’s race-based academic goals.

TALLAHASSEE, Fla. (AP) — The civil rights group Dream Defenders is expected to present a petition at the Capitol to Gov. Rick Scott.