Miami nightlife runs on music and DJs are the maestros of that scene. It’s an industry heavily represented by men. But a group of women in a DJ class wants to drop just as many beats.

“I’m DJ So Saucy because that’s pretty much been my vibe for the last couple of years,” said Angie Triana, 23. “I have a different connection with music that no one understands, but DJs do.”

Monica Sorelle, 28, drew from personal experience for her name.

“One time I was at a party and I was really drunk and I ruined the relationship," she recalled. "When I got confronted about it, I said, ‘It wasn’t me. It was Sonica Morelle,’ which are my initials flipped over.”

The nine other women in the group went around in a circle, introducing themselves for the first day of Girls Can Spin 2, an eight-week DJ'ing class for women. From June to July, students met every Wednesday at Cafe OTL, a craft coffee spot, to learn the art of dropping the perfect beat.

“We’re here because we believe in you,” Helen Peña, founder of the artist collective (F)empower, told students on the first day of class.

(F)empower partnered with Art Cortex, an after-school music program for kids, to launch the class, which had been adapted from a 90-minute workshop at III Points Music Festival last year. Peña says that class was so successful that she wanted to offer it again this summer.

“There’s a problem in Miami,” she said. “There aren’t enough female DJs represented.”

Some students, like Sorelle, who had taken the workshop last year, signed up for the summer sequel (the full course cost $240 and offered two scholarships).

“I’m taken with the goals, that it’s a female-run space,” Sorelle said, adjusting her thin round glasses. “Being in an all-female space meant I could mess up without judgment or expectation.” 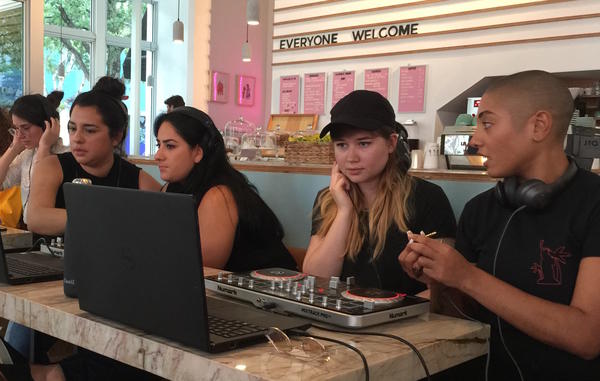 Like any art, DJ'ing requires practice and developing certain skills. Each week, students learn to read beats per minute, cue songs, and time transitions between tracks.

Pam Jones, one of the teachers, says, however, technical chops don’t make a master DJ.

“DJ'ing is being a lover of music and pouring it out to others,” she said. “We are teaching them it’s about timing and feeling. Just close your eyes and hear that beat.”

In 2015, Jones, 28, moved to Miami from New York City, where she first started DJ'ing and opened for artists, such as Questlove, Nina Sky and Jasmine Solano. In Miami, she works in retail management and DJs regularly at The Standard Hotel in Miami Beach and 222 Taco in North Bay Village.

“You always get the shot in the New York,” she says. “In Miami, it’s a boys club. There are DJs who’ve been holding out their spots for so long.”

Christina Hernandez, the other teacher in the class, began DJ'ing in Miami about a decade ago. She said getting up on the turntable to perform at clubs and bars felt like a job interview with the odds weighed against her gender.

“I realized it was extremely difficult because I was a girl,” she said. “Either they needed to hear a sample of my mix first, or I needed to come with some sort of reference. Usually, it was a male reference.”

Hernandez, who occasionally DJ's, has made teaching her full-time gig. The 30-year-old founded the music education program Art Cortex, which teaches kids DJ'ing and music production. She considers part of her job motivating the next generation, particularly young women, to be confident in themselves.

Both Jones and Hernandez believe Miami is changing for the better. They say music venues popping up in trendy neighborhoods, like the Design District and Wynwood, can provide more outlets for female performers.

“These girls here are bringing in these styles I don’t hear,” Hernandez said. “I want all these girls to get booked because I want to go to that party.”

During class, a large speaker played the students’ working mixes. The sounds jumped from smooth R&B to the heavy bass of a harsh techno tune.

Ochoa – DJ Nice To Know Ya – prefers to jam to more “controversial music” like Jirafa Rey, rappers of the queer scene. She moved to Miami about two-and-a-half years ago from New York City and took the DJ class to help her break into the Caribbean DJ'ing scene. 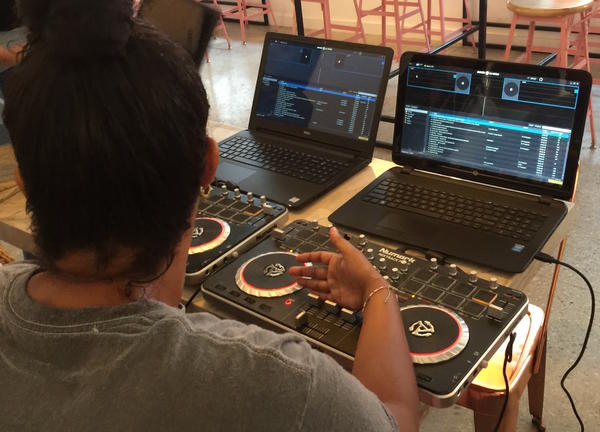 For the past several months, Ochoa has been helping produce events for a local DJ, Silent Addy. She says that job can’t give her what the summer class can.

“Better that I learn from my peers of women than him anyway,” she said.

Ochoa hopes to eventually open for Silent Addy and then get booked for her own gigs.

“You have to prove yourself first and make sure you’re setting the right tone,” she said. “Letting them know this is a business transaction instead of trying to get them to date you.”

According to Peña, (F)empower plans to make the DJ class the beginning of a larger skills academy for women.

“We want to see ourselves in the change, to bring variety and nuance in Miami’s nightlife,” she said.

Students will showcase their mixes at a "graduation" party on Thursday, Aug. 2 at Floyd in downtown Miami.