Developers and investors looking for the next Miami real estate diamond in the rough are venturing into Allapattah, one of the city’s oldest neighborhoods bordering trendy Wynwood.

That proximity to the city’s booming urban core, along with Metrorail access and riverfront views, have prompted discussion over the future of development in Allapattah, which some say is at a crossroads.

City leaders, residents and business partners met Tuesday for a public meeting called “Allapattah at the Crossroads,” held at the University of Miami’s Life Sciences Building.

“This neighborhoods’s growth depends on responsible development practices, which will help it continue to emerge as a vibrant part of Miami’s cultural scene,” he tweeted.

Happy to speak about the future of #Allapattah at the @ymcasoflo and @MiamiChamber Housing Solutions Panel. This neighborhood’s growth depends on responsible development practices, which will help it continue to emerge as a vibrant part of #Miami’s cultural scene. pic.twitter.com/hVpSkOHL9T— Mayor Francis Suarez (@MiamiMayor) October 9, 2018

On the panel were Willy Gort, city commissioner for District 1, which includes Allapattah; Pat Gajardo, president of the Allapattah Neighborhood Association; Andrew Hellinger, a principal of the Coral Gables-based developer Urban-X Group; Michelle Moyer, executive director of the Allapattah YMCA Family Center; and Lyle Stern, president of the Koniver Stern Group, a retail leasing company based in Miami Beach. 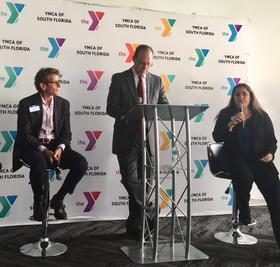 Moderated by WLRN’s Tom Hudson, the discussion focused on affordable housing and its role in future development projects, like River Landing, a shopping and residential complex under construction at North River Drive and Northwest 11th Street, on the Miami River.

Hellinger says River Landing could serve people working in the nearby health district – or those making an average salary of $55,000 a year. The median annual salary in Allapattah is about $23,000 and it's predominantly a renter's community.

Gajardo, who grew up in the area, hopes it can avoid the negative outcomes of gentrification.

“There’s skepticism in our community,” he says. “I have childhood friends who’ve been priced out and had to move out. We don’t want that.”

Dianna Rivera, a pastor, has been living in Allapattah for more than 14 years. Throughout that time, she’s opened Citi Church and an accompanying private Christian school there.

She attended Tuesday’s meeting and said she’s worried about losing the spirit of her home.

“My concern is that developers are just after their profit and they can sometimes overlook the heart of a community,” she says. “We look at us as being in the urban heart of Miami, and there’s a heart to a city. It’s not just buildings. It’s not just concrete.”