Are Underground Power Lines Really The Solution To Power Outages In South Florida?

Hurricane Irma was a game-changer for South Florida. Cities are preparing for hurricane season differently now. And the region’s largest utility, Florida Power & Light, is pushing for a method that could turn the lights back on faster after a storm.

It’s called undergrounding. A lot of people think of it as the solution for keeping the power on. But that’s not necessarily how it works.

Listen
Listening...
/
Listen to the audio version of this story.

Buzz Fleischman cultivates a lush garden in the backyard of his Miami Springs home. Giant elephant ear leaves, tall grass and a Buddha statue provide a barrier from neighbors' homes.

When Hurricane Irma hit the area as a weakening Category 2 storm, a 75-foot African tulip tree toppled in Fleischman's yard, knocking down a power line.

"The tree was just swaying in the breeze," he says.

Fleischman wanted to ensure that he wouldn't lose power again if another big storm like Irma came. So, in the process of building a pool, he had his power lines buried in his oasis of a yard (Miami-Dade County can require homeowners building a pool to have underground power lines).

Fleischman hired Alex Varela, a contractor based in Miami Springs, to do the digging for the power company, Florida Power & Light, which supplies most of South Florida.

Varela converted power lines that had been strung up on poles, overhead, to ones that function underground in water-tight pipes instead. The process took five weeks and cost about $3,700 from start to finish – to hire the contractor, dig, insert the pipes and get permits.

Fleischman say he's hoping the investment lasts for the long-term.

"Because power goes out occasionally [even] when there’s a slight rainstorm," he adds. "This is just what the power grid is like in South Florida."

When Hurricane Irma barreled up the state last September, it brought mainly tropical storm conditions to most of South Florida. Millions of homes, from Key West to Palm Beach County, were left hot and in the dark. That led the region to rethink how it prepares for future storms. 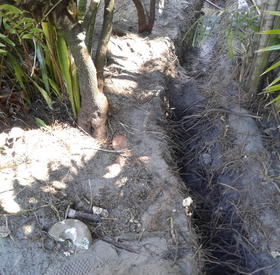 Many South Floridians consider underground power lines a panacea or a silver bullet-method for getting the lights to come on quickly after a hurricane.

Utility folks even asked about undergrounding as a "magic elixir" during a May hurricane preparedness workshop in Tallahassee. The state’s major power companies, including Florida Power & Light, presented at the Florida Public Service Commission (PSC), which regulates utility rates.

Last month, FPL launched a three-year pilot program to put more power lines underground in more neighborhoods. According to FPL, 40 percent of its lines are already under the ground.

Julie Brown, a commissioner for the PSC, asked the company about the program’s goals: "Is undergrounding an elixir to all of the problems?"

"No. I wish," said Bryan Olnick, vice president for distribution operations at FPL.

It turns out underground power lines are an answer – but not the only answer.

After the 2005 double-hitter of Hurricanes Katrina and Wilma, FPL invested nearly $3 billion to harden its electrical grid, to try to make it more resilient against the storms of the future.

Underground power lines are one of several hardening techniques that help make the grid more storm-resilient. Others include managing trees near electrical infrastructure; replacing wooden poles with concrete or steel ones; and reinforcing utility poles with guy wires (tensioned cables) for more stability.

FPL, which maintains a hybrid system of above-ground and underground lines, says it's planning to harden all the power lines along major thoroughfares by 2024.

Not A Silver Bullet

At the May PSC meeting, Olnick said underground power lines performed 80 percent better than overhead ones during Hurricane Irma – which means they were that much less likely to lose power.

"Which was expected," he said.

Irma was primarily a wind storm that reached max speeds of 120 miles per hour in the Keys and weakened to just-below hurricane-force conditions as it crossed the rest of South Florida. Buried lines were less likely to lose power because the primary cause of the overhead outages were falling branches and flying debris, according to Olnick. 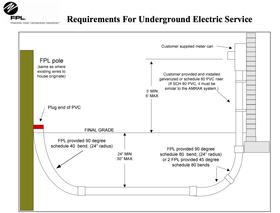 If Irma had been a water storm, underground power lines would have faced other challenges, namely severe flooding and storm surge.

"It’s true that if you put them underground, you mitigate the risk of damage from wind events and flying debris. But now what you've done is you’ve traded off that risk," says Ted Kury, director of Energy Studies at the University of Florida's Public Utility Research Center.

Buried power lines are kept inside PVC pipes that are made to be watertight. But if water manages to enter the pipes, then the outages can take longer to remedy because accessing buried infrastructure takes more time. (The U.S. Department of Energy estimates repairing "widespread below-ground failures" can take several weeks.)

"It will take longer for us to restore power in that kind of situation because electricity and water don't mix," says Bill Orlove, a spokesman for FPL.

South Florida’s geology compounds the water tradeoff. The pipes are sitting atop a bedrock of porous limestone – essentially a big sponge.

The ground material also varies with geography. Varela, the Miami Springs contractor, says he has hit sandy soil there while Coral Gables is known for its coral rock. 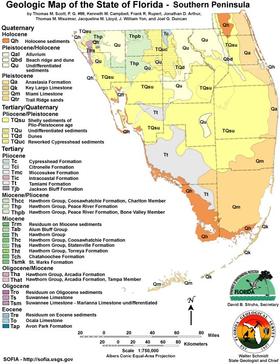 FPL says it's trying to counter storm flooding. According to Olnick, the company is using flood monitors at substations to keep track of existing water. (During Irma, two substations in FPL’s 35-county territory were de-energized, or powered down, because of flooding.)

In Downtown Miami, the company is experimenting with sub-aqueous power lines that can be submerged in water, according to FPL's Bryan Olnick.

Despite these efforts, Olnick says this technology is still new and is only being used in a few, select places that are considered most vulnerable. That means most neighborhoods that have underground power lines, or are beginning the retrofitting process, aren't equipped with the underwater technology.

Newer developments, such as Doral in Miami-Dade County and Weston in Broward County, already planned for underground power lines during initial construction. Older neighborhoods, such as Oakland Park and Sunrise Key, for the most part, have above-ground lines.

Palm Beach is in the middle of trying to put every single power line in the town – and all of the town's neighborhoods – underground. It’s a $90 million undertaking that residents pre-paid for, or will pay through a special assessment tax for the next 30 years.

Contractors in Palm Beach who are working with FPL are in construction phases at the north and south ends of the barrier island, for traffic's sake. Undergrounding all of the lines started in July 2017, and will take seven to eight years to complete.

Keys Energy Services and the Florida Keys Electric Cooperative Association – not FPL – supply most of Monroe County’s electricity. The majority of power lines running through each of the Keys is still above the ground.

Sunrise Key is an island. It's one of several neighborhoods in Fort Lauderdale that have approached the city and FPL about the possibility of getting power lines put underground.

Putting power lines underground may be more convenient than a generator, but it is also more expensive.

FPL says retrofitting – taking above-ground lines and putting them underground – can cost anywhere between $500,000 per mile to more than $4 million per mile for a given neighborhood.

"It's a matter of the cost and who’s going to bear it," says Miami-Dade County Commissioner Daniella Levine Cava.

Levine Cava sponsored a resolution to retrofit the county’s FPL power lines. It passed but was never implemented.

After hurricanes, power companies typically ask the Public Service Commission to approve an extra fee to help pay for storm recovery. After Irma, FPL didn't file the paperwork for that fee.

The Dade County resolution is asking the commission to make putting power lines underground part of that storm cost recovery.

"It's an investment in the short term to benefit all of us in the long term," Levine Cava says.

The Complications Of Sea-Level Rise

"Everything we do has to take into consideration the rising seas and the best method to secure our infrastructure for as long into the future as we possibly can," Levine Cava said. "That includes our roads, our houses, our buildings. And wiring is just part of that."

The latest projections from the South Florida Regional Climate Compact show seas could rise by over two feet by 2060. A 2015 study by the Union of Concerned Scientists found that sea-level rise aggravates storm surge, exposing more power substations to water.

According to the study, 37 of 222 major substations (where high-voltage power is lowered for safe distribution to neighborhoods) in southeastern Florida are exposed to flooding from a major storm today. That number doubles by 2050 and triples by 2070 because sea-level rise has heightened the storm surge from a Category 3 hurricane.

"When you build these pieces of infrastructure, you have to be thinking about not just the reality of potential exposure today, but over the course of a lifetime," says Julie McNamara, an energy analyst, who co-authored the study.

According to the U.S. Department of Energy, saltwater intrusion – saltwater seeping into groundwater – associated with sea-level rise can also damage underground wires.

The study suggests shifting toward clean-energy technologies to make electrical infrastructure more resilient. They include solar and wind power, combined heat and power plants, and microgrids, which are self-contained, self-sustaining energy systems.

Even that solution isn't a guarantee, she adds.

"As much as we can try to improve the resilience of the grid, the lights will still go out," she says. "Especially given that no two storms are the same. Especially since sea-level rise will be making these challenges all the greater."

In other words, South Florida can't just bury its vulnerabilities.

WLRN wants to hear from any FPL customers who have been approached about the new pilot program. If you've been contacted about putting more power lines in your neighborhood underground, let us know.

This story is in collaboration with the The Invading Sea, an editorial partnership among The Miami Herald, The Sun-Sentinel and The Palm Beach Post, with reporting from WLRN, on the growing threat of sea level rise to South Florida.

You can find more coverage at theinvadingsea.com.