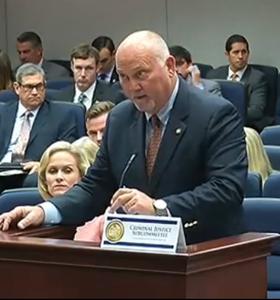 Rep. Neil Combee (R-Polk City) says his measure removes 10-20-Life as a penalty for aggravated assault cases, such as threatening a person with a gun.

“Although it’s very few cases, in recent years, people have been convicted of crimes such as aggravated assault for threatening to use force and have been sentenced to mandatory minimum sentences of 20 years in prison. These cases, I believe, fell out of the legislative intent behind this law. It has the support of the Florida Sheriffs Association, the Florida Police Chiefs Association, Florida Prosecuting Attorneys Association,” said Combee, speakinig before the House Criminal Justice Subcommittee Wednesday.

Combee’s bill also has the backing of the National Rifle Association and Families Against Mandatory Minimums. Its Senate companion has one more stop before heading to the floor.