Colombia, Latin America See Summer Of Surge For Women In Politics – And Beyond?

Ramírez’s oath of office would have been a historic enough moment – but the bigger story is that half the cabinet she’ll lead are also women, in charge of ministries from Justice to Energy to Culture. It’s the first time a Colombian government has had that top-level gender parity.

That matters a lot to many Colombians, especially now, as the country tries to implement a peace accord that recently ended a half-century-long civil war.

“This is something that women, we know how to do it,” the Harvard-educated Ramírez, who also served as Colombia’s first defense minister in the 2000s, told Israeli radio in 2012.

“We are very familiar about how to protect family, citizens, all over around us.”

READ MORE: How Is the #MeToo Movement Translating Across Cultures in South Florida?

Whether or not women are born peacemakers, women like Ramírez are breaking the political techo de cristal, or glass ceiling, in Colombia and throughout Latin America. One big reason: more than a decade ago, much of the region put new election laws in place that women’s advocates say are now bearing fruit.

“Finally, our children can see equality is part of our political culture,” says Beatriz Quintero, who heads the nonprofit National Women’s Network in Colombia. “And that’s largely because by law a third of all candidates in Colombia’s legislative elections must be women.”

Quintero points out the quota statute has helped make the Colombian Senate almost a quarter female today. Elsewhere, Mexico’s Senate, and Argentina’s, are almost half female, thanks to similar laws. And in the past decade six heads of state in Latin America and the Caribbean have been women. (That’s six more than the U.S. can count.)

“Having more women in government is an essential first step,” she says. “But it’s no guarantee of advancing women’s rights in other areas.”

Quintero feels the most urgent area is violence against women. More than a third of Colombian women – about 55 a day – suffer sexual violence. That’s one of the highest rates in the world, and sadly it’s the norm in much of Latin America.

“Not just the violence,” says Quintero, “but the impunity men enjoy after committing the violence.”

“We have seen great advance in the recruitment for women, but we still have a long way to go,” says Carolina Forero, a marketing director at Hays Colombia, an executive recruitment firm. 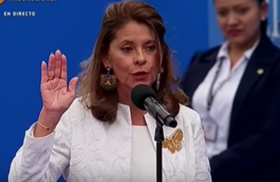 Half of Colombia’s presidential cabinet may be women now, but only 7 percent of Colombia’s female workers hold upper-level executive positions. (In Latin America, fewer than a fifth of top 500 companies have women senior executives.) Forero says that’s changing now as Colombia’s economy opens up and modernizes. Many more women are attaining middle-management positions or higher – and they’re “counting on the progress in Colombian politics to send a strong message to Colombian business,” she says.

As a result, Forero adds, citing a recent study she led, "56 percent of [Colombian] women are aspiring to the top level," including CEO posts. "And we project that in 10 years there will be equality between men and women for getting positions in top management.”

In Argentina, thousands of women marched for abortion rights. But the Senate narrowly rejected a bill that would have legalized abortion in the first trimester. Both men and women voted against it.

“You have very conservative women, too, and the result of our abortion law shows that,” says Graciela Römer, a prominent Argentine political consultant.

Still, Römer argues that because Latin America has some of the world’s most severe statutes outlawing abortion – and because the lower house of Argentina’s congress did approve the bill – coming that close to legalizing abortion in Argentina was a moral victory for reproductive rights advocates.

“Abortion was for many, many, many years taboo,” says Römer. “But for the first time the issue is on the agenda. It doesn’t pass today, but perhaps next year. That, for me, is the most important thing. It’s unbelievable.”

But more believable this summer, as rules that put more women in control of the Latin American agenda take hold.