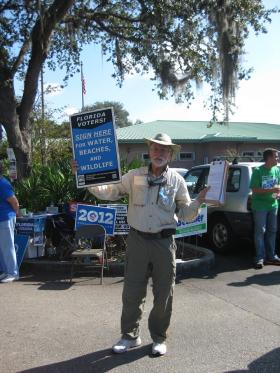 Florida’s Water and Land Legacy campaign is one step closer to getting a constitutional amendment to fund the Florida Forever land preservation program.

On Thursday, the group announced that it had collected enough signatures to qualify the measure for review by the Florida Supreme Court. A proposed amendment is eligible for state Supreme Court review when its backers collect 10 percent of the total 683,149 signatures required—or 68,314 John Hancocks.
So far, the campaign has collected 116,573 signatures. The Florida Department of State has verified 68,314 of those and sent the ballot measure to the state Supreme Court for further legal review.
A press release explains the how the amendment would work:

The amendment would dedicate one-third of the existing documentary stamp tax, which is paid when real estate is sold, to restore the Everglades, protect drinking water sources, and revive the state’s historic commitment to protecting natural lands and wildlife through the Florida Forever Program. The amendment would provide more than $5 billion for water and land conservation in Florida over the next ten years without any tax increase.

In addition to meeting the 10 percent signature requirement, Florida’s Water and Land Legacy campaign got another boost. On Thursday, the group also announced that it has secured endorsements from 256 organizations, including the Florida Trail Association, the Florida Consumer Action Network and the National Wildlife Federation.
Copyright 2014 WUSF-FM. To see more, visit http://www.wusf.usf.edu/.