Couple Of NRA-Backed Bills Died During 2014 Session; Sponsors Say They’ll Be Back 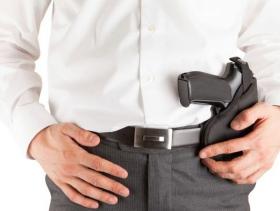 A couple of NRA-backed priorities died in the Florida Senate Thursday. The issues centered around one bill that that would allow people to legally carry a concealed weapon without a permit during a mandatory evacuation and another issue relating to tweaking Florida’s Stand Your Ground law.

About a month ago, the National Rifle Association’s Marion Hammer appeared confident about a bill allowing people to carry a concealed firearm without a permit during a mandatory evacuation order declared by the Governor or a local official.

“I am not concerned that this bill will not pass. This is a good bill. This bill is needed, and it’s that simple,” said Hammer in late March.

But, in the last week of Session, the measure—which has had some problems before—encountered some further trouble in the Senate.

“What does this bill do? And, why have you brought it to us,” asked Sen. Jack Latvala (R-Clearwater).

“Why do we need to arm the people of Florida if we already have trusted law enforcement here to protect us,” asked Sen. Maria Sachs (D-Delray Beach)

Responding to that last question by Sachs, Brandes cited scenarios dealing with law enforcements’ handling of Hurricane Katrina and Andrew.

“There was nowhere near enough individuals to secure the city, to prevent looting, to do any of that, and so what we’re saying is when law enforcement is overwhelmed in those type of situations, you should be able to lawfully evacuate your home to a safe place and bring along those weapons that you would otherwise have to leave at home potentially,” Brandes replied.

While he says he supports the bill’s overall concept, Latvala says the bill is a bit vague and doesn’t give clear direction to law enforcement. So, he offered an amendment backed by the Florida Sheriff’s Association, that raised those same concerns.

“All this amendment does is it provides a definition for in the act of complying with a mandatory evacuation order. It provides clarity for law enforcement and citizens to know when and where the law will apply by defining the reasonable place, time, and manner that a person can carry a concealed weapon without a license when they’re evacuating,” said Latvala.

But, when Latvala’s amendment got adopted 23-15, Brandes later put the bill on hold. He says that effectively killed the bill this session.

“Unfortunately would have made it a felony for you to be on the wrong side of the street or for you to be an hour late, if you were carrying a concealed weapon during an emergency. So, with that amendment on, we were better under existing law,” said Brandes, Friday. “So, we postponed the bill, and we won’t bring it back up today.”

That wasn’t the only gun-related issue to fail that day. There were a number of amendments tacked onto the bill, which included parts of the Stand Your Ground “tweak” bill authored by Senate Democratic Leader Chris Smith and Sen. David Simmons (R-Altamonte Springs).

The bipartisan bill was moving in the Senate, but later stalled under the direction of Senate leadership. So, both Smith and Simmons promised to try and put amendments onto another bill, and Smith did just that Thursday.

“It was a simple amendment and a simple statement that the Legislature could have made as to what we believe Stand Your Ground is. The amendment would have codified that it’s not for vigilantes, it’s not for people engaged in mutual combat, and it’s not a pretext for revenge,” said Smith, following the vote. “It was a chance for members who constantly say ‘I didn’t intend for Stand your Ground to be used that way’ to actually put it into law and it was disappointing that not many of my colleagues had the courage to do that.”

Both Smith’s amendments failed each time with Democrats opposed. Every Republican voted against it, including Simmons.

“This is part of a package, and it is an accurate statement of the law. It really is...but it’s part of package. And, if we’re going to do it, we need to do the whole package,” said Simmons, during the floor debate.

And, Smith promised this issue would come back up again next year.

“Oh definitely, we’re going to keep going, just like in-state tuition, just like medical marijuana, just like a lot of issues. Eventually, we’re found right, and they come around to voting the way of the Democratic caucus because we keep on bringing up these issues,” said Smith, speaking to WFSU Friday.

Meanwhile, another amendment to Brandes’ bill that never got considered was authored by Sen. Dwight Bullard (D-Miami). It would have changed the title of the measure from a “bill related to carrying a concealed weapon or concealed firearm” to a “bill related to the zombie apocalypse.”

“I wanted to bring light to the sort of the silliness of a bill like that. The idea of basically handing out an automatic pass on having a concealed carry permit in an emergency of all times is the wrong approach, the idea of it scares me. But the reality is when you look at any plausible scenario in which you would do that, the best one would be a zombie apocalypse,”  said Bullard, as he laughed.

TALLAHASSEE (The News Service of Florida) — Florida's GOP-dominated House approved a proposed constitutional amendment Wednesday that could give the winner of November's gubernatorial election the power to reshape the state Supreme Court.

House Republicans sent the measure to the November ballot in a 74-45, party-line vote, after Democrats objected to both the process and the politics behind a proposal that would allow an outgoing governor to replace appellate or Supreme Court justices whose terms expire on the governor's last day in office.

Making sure prison release orders are properly verified is the goal of bill authored by Sen. Greg Evers (R-Baker) in his capacity as chair of the Senate Criminal Justice Committee.

The 2014 Florida Legislature passed a number of bills relating to health care, most of them modest in scope.

But at least one that passed will probably save lives: the Child Welfare Act, which in part responds to the deaths of 477 children who were supposed to be under the protection of the Department of Children and Families.

MIAMI (AP) — An omnibus health care bill stripped of two of its biggest provisions has died in the waning hours of the Legislative session.