On Saturday, August 16, a group of friends and supporters gathered for a "Cyclist Respect Rally" on the bike lane of 16th Street near the intersection with Jefferson Avenue in Miami Beach. 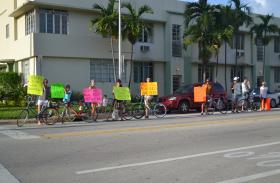 Along the street, they stood in a line between the car lane and the bike lane to create a human barrier where event coordinator Jessica Hunter was hit by a car earlier this month.

The incident, which happened on August 8, took place when Hunter was on her way to work.  She was hit by a car that entered the bike lane, causing her to flip over the handle bars. She landed on her head and shoulder when she hit the pavement. Fortunately for her, she was wearing a helmet and didn't sustain any injuries. Her bike was undamaged, the police was called and the driver received a citation.

"I actually got on my bike and rode to work right after it which I probably wouldn't have done if I was thinking a little bit more clearly," said Hunter, "I was really lucky. It could've been really bad... and instead of complaining about it, I wanted to actually do something about it."

Hunter reached out to friends on social media.

"I think I invited about a 120 [friends] and the invite went to well over 200," said Hunter, "every organization that I shared it with were all supportive of it." 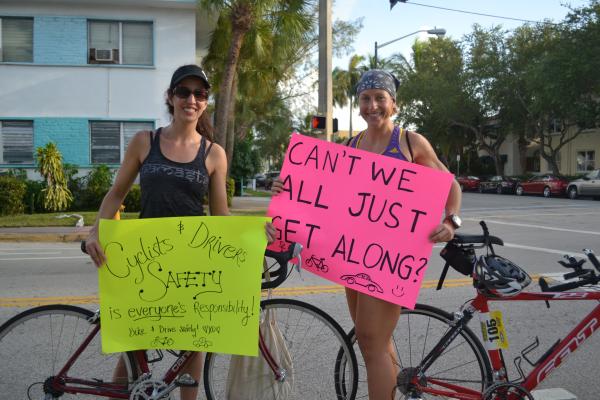 "I was gonna be out here by myself with my sign if no one else came so I am just glad there are other people here and I am glad I have support from my friends," said Hunter. "The turnout is not as high which is kind of what I expected, but I think it got a lot of exposure, which is important to just try and communicate and to create awareness of the rules of the lane." 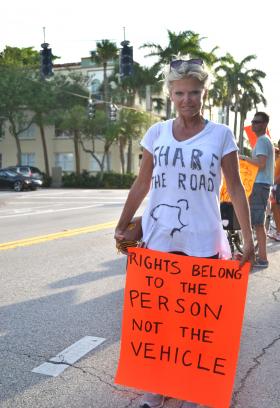 One of Hunter's friends who attended was Becky Bemis, whose daughter was hit by a car in front of the University Of Miami in February while crossing US1 on her bike.

"She [daughter] no longer rides a bike, I think psychologically she was impacted by it and I am also afraid to ride a bike," said Bemis. "I am here for motorists to become aware of bycicle safety. I came here to support Jessica and all the other bikers."

"We've gotten honks, thumbs up, and some people who didn't have the friendliest things to say, but for the most part, its been good," said Hunter.

Hunter eventually wants to do more rallies in high-traffic areas in Miami Beach and other parts of Miami to spread awareness.

Shacter Family Bikes Across Iceland To Raise Money For WJCT

Bags and bikes packed and ready to go - the Shacter family is setting off to bike across Iceland to raise money for WJCT.

The family, David, Melody, Jac, Zach and his girlfriend Rachelle, will ride over 800 miles over the span of a month.

Melody Shacter will be spending her 54th birthday on the trip.

“I never dreamed I would spend it riding a bike and sleeping on the ground in a tent,” said Melody. “Having kids stretches you in ways you can never imagine!”

Sweet Surprise For Family Biking Across Iceland For WJCT

Ten days into their bike tour across Iceland supporting WJCT, the Shacter family had already ridden 255 miles with many more to go.

Depending on weather and distance between campsites, David, Melody, Jac, Zach and his girlfriend Rachelle, have averaged between 21 to 43 miles a day to complete their 800 mile trek.

But the family is doing more than just pedaling.

Zach Shacter and his girlfriend Rachelle celebrated Iceland’s National Day  in a memorable way, documenting it on their tumblr.

All they do now is flash “F-DOT test message,” but electronic signs recently erected along roads in the area will soon go online.

The state is funding the signs through The North Florida Transportation Planning Organization.

They will let drivers know about problems ahead on the roads like accidents, congestion and construction zones.

WJCTNews.org's "Hidden Gems" is a new web-only series checking out some of the great places in Jacksonville you may not know exist.

Just a few miles north of better known beach locations is Kathryn Abbey Hanna Park. Slightly off the beaten path and worth the three dollars (cash only!) to get in, Hanna Park is more than just beach access.