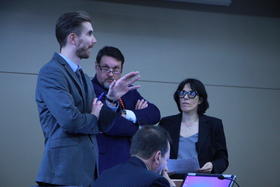 Defense attorneys for the four men facing trial in the hazing death of Florida State University Pi Kappa Phi pledge Andrew Coffey want more specifics from the prosecution as to how their clients caused the 20-year-old’s death.

Second Judicial Circuit State Attorney Jack Campbell says hazing is not a single blow that can cause death, but a process. Yet, defense attorneys say the state needs to tell them what action their clients made that is responsible for Andrew Coffey’s death late last year. Campbell calls the request for a new charging document a defensive tactic he says is meant to hamstring his ability to prosecute.

Judge Martin Fitzpatrick did not rule on the defense’s motion for more specific charges. He did, however, reinstate bond for Clayton Muehlstien, which is now $7,500. Muehlstein’s original $2,500 bond was revoked earlier this month after he was arrested following a drunken altercation outside of a bar in Tallahassee, and Fitzpatrick added an additional $5,000. Under his pretrial release conditions, Muehlstein had been ordered not to drink or visit the Capital city.

State Attorney Jack Campbell recommended Muehlstein be evaluated as to whether he has a drinking problem.

“You either have a person that’s under the effects of a severe alcohol problem, who is unable to comport his behavior with simply being told not to drink for a few months,” Campbell said. “Or, you have somebody who has nothing but contempt for the court and the judicial process, and so those are the two paths.” 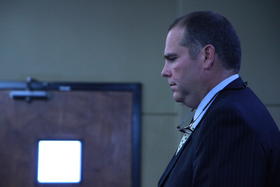 Judge Fitzpatrick, though, had a different take on what Muehlstein’s actions say about him.

“I think there might be another path here, and that would be the stupid path. Which Mr. Muehlstein would probably agree he is square in the middle of,” Fitzpatrick said.

Fitzpatrick did not order an evaluation for Muehlstein, but a 24-hour alcohol monitoring system known as a SCRAM unit. The judge did not uphold a gag order filed by Campbell prohibiting the defense from talking about facts of the case to media or others pre-trial.

The gag order was filed after WFSU published a story in which two defense attorneys alleged evidence was withheld from the grand jury that would have shown Andrew Coffey had what they called a “binge drinking problem.” Campbell says he expects the case to become more high profile as the June trial approaches.

“We need to do our talking in court, and not in the newspapers or on the radio,” Campbell said.

Brian Tannebaum, the attorney for defendant Anthony Petagine, says Campbell has made numerous comments to the media he calls prejudicial to the case.