Shawn Hamilton has been appointed as the new secretary of the state Department of Environmental Protection.

There, he met with Tampa bankruptcy attorney Herb Donica, the new court-appointed receiver who will oversee the site's closure.

There are still about 261 million gallons of wastewater held at Piney Point, and summer rains are once again threatening to overflow its banks.

Here's part of his interview with WUSF's Steve Newborn:

HAMILTON: Well, first of all, just going back with being with the agency for over 13 years, being involved for that time and so many different parts of our diverse mission, it's just truly an honor to serve in this capacity. But for our priorities, it's to continue to execute on the governor's vision for the environment in the state of Florida and bring those efforts and projects to the fullest extent possible to completion. That will remain the focus. 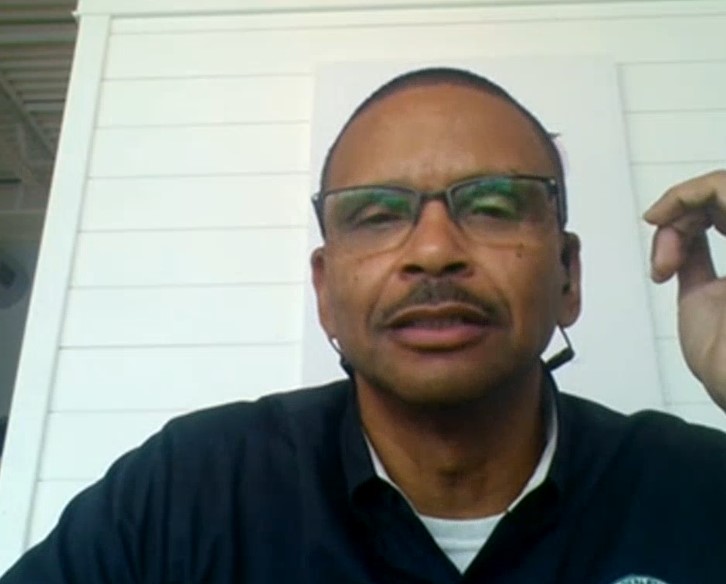 One of the focuses is Piney Point. DEP has said that the site can only handle 11 or so more inches of rain. So what's the update, and what's the plan to remove some of that excess water, if we have to do that?

I had a chance to spend some time at the site today, to get a chance to meet with the receiver, but also get a sense for current site conditions. And you know, we're in a better spot than we were a few weeks ago.

But this being Florida, rains are inevitable and we're in the rainy season. Right now, the site's at about that 11-inch mark. But since the last update, we've deployed some intermediate water management systems that actively dispose of water. And so for the most part, we're in a good spot, with a favorable rain pattern and tropics up to this point, it has allowed us more time.

So just to give you a quick update The site's still stable, the temporary patch is holding firm, stormwater systems are operational. And then as of hopefully later this week, I would expect those intermediate water systems that direct connection to allow us in water over to the county's treatment system. And the aeration system, we expect those systems back online this week, as well, and once again will continue to give us more intermediate water management options.

Is that a pipeline to Manatee County? I believe they're planning underground injection. Is that still on the table?

Well, that's separate and distinct from the injection. Right now, we are trying to take every effort to reduce the possibility of a treated discharge. You know, one of the things the site operator has been doing is trucking water over to the county's treatment system. But there is a direct connection to the county system already at the site that's been operable for a while, principally because of issues with the pipe being plugged up a little bit, and also most recently with some pumping capability.

And so right now, that capability, we expect to be back online here in the very near future. The receiver is also working and engaged on that component that allows up to 100,000 gallons a day of direct disposal over to the county and alleviate the need for trucking. And so if you couple that with the aeration system that's also been down, you're talking about knowing the magnitude of 250,000 gallons a day of disposal capability that will be resumed back at the site.

And so it's those types of things like that we're counting on to help minimize the risk of a potential treated discharge.

Are there any plans in some kind of emergency — if heaven forbid a hurricane strikes the area — to begin pumping water again into Tampa Bay, like happened several months ago?

Now that there's a receiver who is duly sworn so to speak to operate the site, I think he's going to obviously draw his own conclusion in close coordination with the department.

But you're right, those plants do exist in the unfortunate event in making sure that we're not caught off guard, and making sure that the site operator and the receiver, they have the plans, they have the treatment capability, and that they have an understanding if that does happen, how they might approach that so they are controlled, and they're treated to the best possible capability. And yes, those plans are in place.

Several environmental groups filed a lawsuit Tuesday over the release of contaminated water from the former Piney Point phosphate plant into Tampa Bay.

The lawsuit was filed against the Florida Department of Environmental Protection; HRK Holdings, which runs Piney Point; and the Manatee County Port Authority, which allowed dredged spoil from Port Manatee to be dumped into the plant's retention pond.

Justin Bloom, with Tampa Bay Waterkeeper — a grassroots group that is one of the plaintiffs — said he wants this lawsuit to lead to a full cleanup and closure of Piney Point.

Researchers monitoring water quality near the former Piney Point phosphate plant have identified increased levels of blue-green algae in the area where more than 200 million gallons of polluted water was discharged recently.

Powerful, sustained winds are rare this time of year in Florida, and that means the polluted water that spilled from the Piney Point phosphate plant last month is likely to linger in Tampa Bay for months, a USF ocean physicist said Wednesday.

“Every time the tide sloshes to the north or to the south, this plume is going to spread a little bit more to the north and to the south,” said Bob Weisberg, a professor of physical oceanography at the College of Marine Science at USF.

The state expects to put more than $115 million toward closing the site of a former phosphate plant where a reservoir leak set off a wastewater crisis in Manatee County.

Gov. Ron DeSantis also said Tuesday investigators are working to determine if legal action can be taken against HRK Holdings, the owner of the old Piney Point site.

Crews at the former Piney Point phosphate plant in Manatee County have installed a steel plate at the site of a leak that has spewed millions of gallons of wastewater from the reservoir over the last week.

According to a Saturday release from the Florida Department of Environmental Protection, the plate is a temporary repair, and crews will monitor its success while determining whether there are any other separations in the liner.

On Friday, officials said polluted water is no longer being discharged into Tampa Bay at Port Manatee.