Coffee-colored water gurgles near the W.P. Franklin Lock and Dam. It flows down the Caloosahatchee River, roughly 30 miles from Fort Myers.

The U.S. Army Corps of Engineers is releasing this water from Lake Okeechobee so it doesn’t overflow.

Sitting on a bench on the south side of the river recently, Jennifer Hecker with the Conservancy of Southwest Florida said this water contains pollutants called nutrients that can intensify the algal blooms plaguing beaches and waterways in parts of South Florida.

“It can also feed red tide offshore and cause that to be more frequent and severe,” she said, “and as a result of those harmful algaes, we can see toxins being produced that can impact aquatic life. So there’s a domino effect.”

That effect also has an economic side. Coastal communities that are heavily dependent on fishing and tourism have already taken financial losses.

Before the Everglades were drained and settled, water flowed through marshes from the lake down to the bottom of the state.

They want the state to buy land below the lake. Water would be stored and treated there before heading into Everglades National Park.

Political hopefuls across the state have picked up their cause, making the debate over Lake Okeechobee’s polluted water a central issue in this year’s elections.

A recent proposal by incoming Florida senate president Joe Negron would buy 60,000 acres of agricultural land for this purpose.

People who live in the largely agricultural area view the proposal as a threat to their way of life.

Farmer Alan Hammock uses a machete to cut a tall green sugarcane stalk on his Glades County farm. He holds it up for inspection. Roots stick out at the base of the stalk like tiny pink tentacles.

“Probably this stalk has had a little bit of wind damage,” he said. “Probably the plant told itself, ‘Hey, we’re getting ready to die. It’s time to start growing again and reproduce.’” 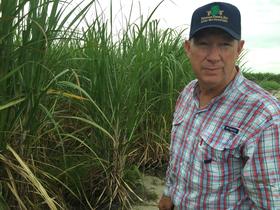 The family-owned farm has been around since 1918.

Ardis Hammock, Alan’s wife, said she feels targeted because this area is rural. She wonders why more developed parts of South Florida are getting a pass, even though they used to be part of the Everglades too.

“What’s the difference in telling people there that ‘I’m sorry, but we shouldn’t have built your homes here, so let’s take out 10,000 homes and put a reservoir in here?’” she asked.

Ardis supports another solution water managers are considering. It involves storing water further north before it even gets to Lake Okeechobee.

She worries that buying agricultural land in her region could upend the local economy and cause people to lose their jobs.

“I love the way of life that’s here,” she said. “For me, I do live in paradise. I do live the sweet life, and I want it to continue.” 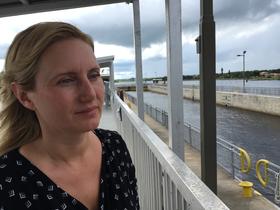 People in coastal areas feel the same way. They’re worried about the continued effects of pollution on their tourism and fishing industries.

Jennifer Hecker with the Conservancy of Southwest Florida said there are programs available that could help communities south of the lake if officials bought the land.

The programs are there “to help train people and be able to give them resources so that they can be able to switch industries,” she said, “or for local governments who are losing property taxes to be able to receive assistance from the federal government to offset those losses.”

This argument is playing out in elections across the state this year. Environmental groups have asked politicians to sign a pledge supporting buying land south of Lake Okeechobee.

Hecker said this issue should not pit coastal and inland communities against each other. She said they’re in this together and that everyone needs clean, fresh water.

Gov. Rick Scott, who environmentalists said was reluctant to support wildlife and conservation efforts for most of his first term, will ask lawmakers to designate money for the next 20 years for Everglades restoration.

Scott on Tuesday outlined a $5 billion plan for the Everglades that would begin with $300 million in the upcoming year. The plan, which includes money for building water-retention reservoirs and maintaining the upland habitat of endangered Florida panthers, was announced as Scott prepares to release his proposed 2015-16 budget this week.