Residents in the greater Tampa Bay region woke up to find the remnants of Elsa moving through the area.

The storm weakened slightly overnight and was downgraded from a hurricane to a tropical storm.

Flooded streets, downed trees and power outages were being reported all along the storm's path.

But there were no reports of major storm damage.

The Pinellas County Sheriff's Office reported that the agency did not conduct any rescues overnight due to high water or flooding. Access to the county's barrier islands and beaches reopened at 6:30 a.m.

The Hillsborough Sheriff also reported minimal damage from the storm but rising waters from Elsa's storm surge was still a concern.

The National Weather Service issued storm surge warnings for coastal counties in the greater Tampa Bay region where forecasters were calling for tides of about three to five feet above normal.

At one point this morning, about 20,000 customers in the region were without power, according to TECO, Duke Energy and Florida Power.

Meteorologist Ray Hawthorne of the Florida Public Radio Emergency Network said heavy rain and flash flooding from Elsa were likely to last much of day.

"Persistent rain bands from the Fort Myers area to Lakeland and north to Florida's Big Bend are on their way into North-Central and Northeast Florida later this morning and afternoon," Hawthorne said. "I'm anticipating flash flooding, isolated tornadoes, and occasional gusts up to around 50 mph in the strongest bands."

Rainfall amounts are likely to exceed nine inches in places, which will easily cause urban flash flooding and rapid rises in streams and some rivers, Hawthorne said.

A feeder band far removed from the center of Elsa produced some of the state's heaviest rainfall totals in parts of Southwest Florida. Estimates from radar and gauges are showing between six and 10 inches of rain has fallen from eastern Manatee and Hardee counties southward into Desoto, Charlotte, and Lee counties.

Two to five inches of rain has fallen in the Tampa/St. Petersburg metro areas east into Polk county, with localized amounts greater than a half foot in a small part of northwestern Hillsborough and southern Pasco counties.

Tropical storm force gusts have been observed in Pinellas county northward to Cedar Key, between 45 and 60 mph at times Tuesday night and Wednesday morning. 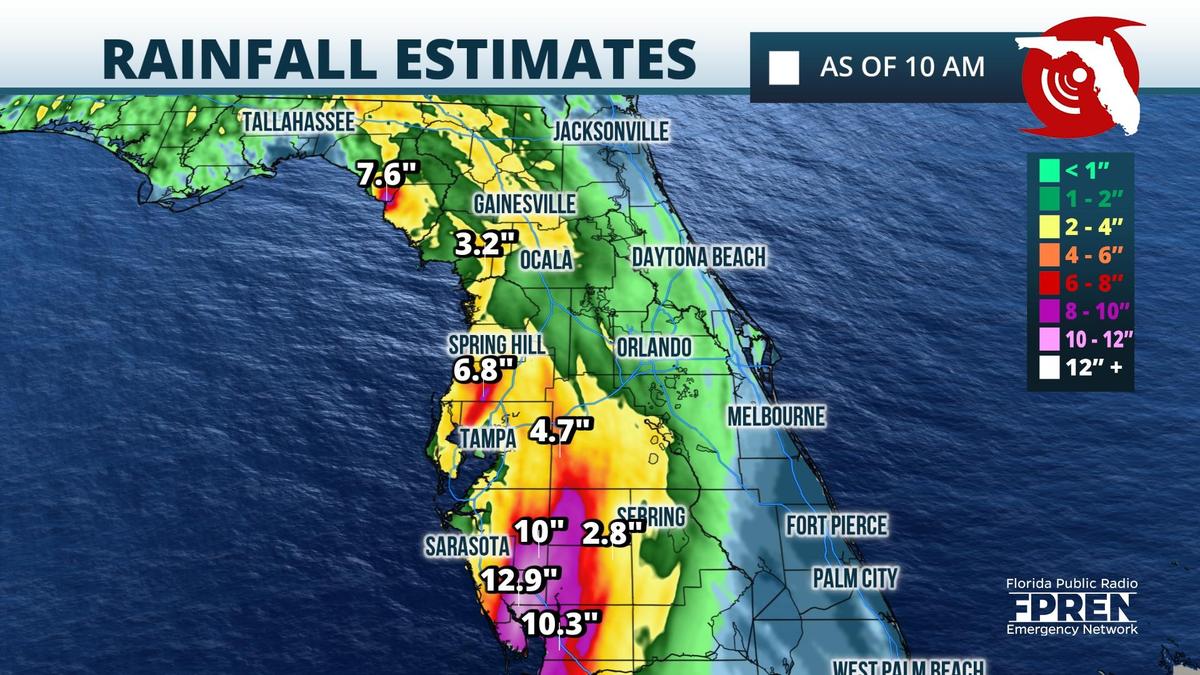 Forecasters say Elsa's path will slice across inland north Florida with heavy rains and wind and then move on to Georgia.

Maximum sustained winds are near 65 mph with higher gusts.

Forecasters said Elsa would slice across inland north Florida as a tropical storm with strong rains and wind, then move on to Georgia, the Carolinas and Virginia before heading out in the Atlantic Ocean by Friday.

Gov. Ron DeSantis declared a state of emergency for 33 Florida Counties ahead of the storm and leaders from Manatee, Pinellas, Hillsborough, Pasco and Hernando counties issued local emergency declarations as well. The storm is causing closures and cancellations across the greater Tampa Bay region as residents prepare for wind, rain and a possible storm surge.

Last updated at 5:38 p.m. Wednesday: The National Weather Service says the tornado warning has now expired but damage reports are coming in, including at least one confirmed tornado.