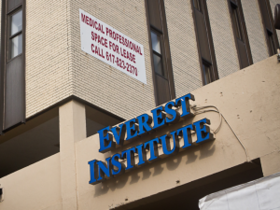 But students often find their degree doesn't qualify for the career they were seeking, and they graduate with tens of thousands of dollars in debt.

Vasquez spoke with StateImpact Florida about what he discovered:

Michael, you have spent a year looking at how for-profit colleges, career colleges, operate in Florida. Why don’t you kind of sum up what you’ve found?

Sometimes career colleges, which are mostly for-profit, sometimes they do a good job with students. They take students who are typically non-traditional, older students. Maybe, if they’re younger, they probably weren’t the best students in high school.

And some of these for-profit institutions do a good job. They give them the hand-holding that these students need to graduate and ultimately get jobs.

But there are substantial numbers of schools out there that have practices that are, frankly, just shocking.

You spoke with a student named Sara Pierce. And Sara was studying to be certified as a nutritionist. When she got to the end of her program she found out Kaplan University’s degrees aren’t qualified to take this national nutritionists test. She found out, basically, her degree was worthless.

Is this common? How often does this happen?

It’s frighteningly common. If it’s not accredited, you’re basically out of luck in about 30 or 35 states. The complaint that comes up over and over and over again is that there are certain things that are buried in the fine print of these contracts that, legally speaking, the schools say, "We have disclosed to student X or student Y that this program doesn’t lead to licensure, it doesn’t lead to this or that."

The problem is what they are putting in writing and what they are telling students during the sign-up process is often extraordinarily different.

As Sara Pierce says, she never would have done this if she had known.

The bottom line for her is: She’s still working at a restaurant as she was before she went to Kaplan University, and she’s now tens of thousands of dollars in debt. Is that right?

That’s correct. She’s, I want to say, about $52,000 in debt specifically from Kaplan. About the only thing that’s changed is she’s working at a different restaurant.

You spoke with a former recruiter for Everest University named Vince Martin, and what he told you is the school's philosophy was to “mine the pain.”

Martin: “If somebody says, ‘Oh, God, I’ve been looking for a job for 18 months.' Oh, can you tell me a little bit more about that? And, now we’re starting to mine the pain. But that’s a very broad level. We’re not, really, getting down to twisting the knife in at this point.”

One of the things schools do is to find people who are desperate for change and then sell them hope. Is that accurate?

That’s completely accurate. These really are the people at the bottom rungs of society.

And going back to school and getting an education and, hopefully, a new career and a new life, this is their one golden ticket, to use the Willy Wonka analogy.

When the government gives you Pell Grants – people think that Pell Grants are free money, and they are to a certain extent if you’re low-income. But there’s a limit. You’re only going to get Pell Grants for a certain number of semesters.

You only get one shot at this. And if it doesn’t work out – and it frequently does not work out in many of the cases we identified – there’s no second chance.

Just how dependent on federal financial aid are these for-profit and career colleges?

Simply put, without you and me and every other taxpayer, many, many of these schools would not exist.

They oftentimes get about 80 or 90 – up to 90 percent of their money comes from taxpayer-funded federal financial aid. It is way too easy to enroll in a school and have Uncle Sam pay the bill, or at least part of the bill, and you’ll deal with the loans later on.

Fewer And Better: How Lawmakers Want To Change State Testing

When lawmakers return to Tallahassee in March for the annual legislative session, they have a lot of questions they need to answer about public school testing.

Senators laid out their concerns about the state testing system last week at a series of meetings.

They don’t know how many tests the state requires or how long it takes to complete those exams.

They don’t know how much the state and school districts spend on testing.

And they’re not convinced they can depend on all the results of those exams.

The School of Arts and Sciences (SAS) in Tallahassee has just over 300 students, and the waiting list to get in is much longer.

Maureen Yoder is one of the founders of the 15-year-old K-8 charter school.

“We started this school with the intent of keeping it small because we want to create a school family,” Yoder says. “We believe that the relationship between the teacher and the students is the primary reason students succeed – besides a good home base.”

And that has many asking how his position on education issues would affect both a Republican primary candidacy and, if Bush survives, a general election candidacy.