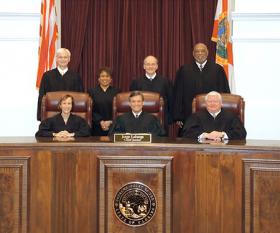 One constitutional amendment proposal on the November ballot could affect Florida politics and policies for decades to come, but it hasn’t gotten much attention. Still, Amendment Three  could give a future governor the power to change the balance of the Florida Supreme Court.

In January of 2019 a new governor will be inaugurated. Inauguration Day is also when three new Florida Supreme Court justices will have to be named. And, according to Sen. Tom Lee (R-Brandon), it’s also the one day, when, up until inauguration—the state will technically have two governors serving. Florida’s constitution is mum on which governor—the incoming or the outgoing—will get to make the appointments, and Lee believes the issue should be settled now.

“We could end up with a major constitutional question about whether justices were seated properly by a Governor, and depending on the stakes involved with that, we could see a great deal of litigation ensue following with which a cloud is over the court in terms of their work product," Lee said earlier this year  explaining a then-bill that lays out a plan for addressing the situation.

That bill is now Amendment Three, and Lee’s take on it is this: since the process for nominating new justices will start under the old governor, it should be the old governor who gets to make the appointment.

“We don’t know who we’re talking about. If we do this in 2016, when this is right over the horizon, there will be a lot of political discussion going on in this process based on judicial philosophy about who this benefits and who it doesn’t. And I think this is the purest time for us to think about good governance, and not politics," he said.

But this is Florida, and the politics of the issue aren’t being ignored. League of Women Voters of Florida Executive Director Jessica Lowe-Minor, says Amendment Three could give the next governor an unprecedented amount of power and influence over the Florida Supreme Court.

“Those vacancies will be opening up at the end of whoever is elected in this upcoming fall election—whether its Rick Scott or Charlie Crist—the end of their term is when those terms expire. So if amendment three passes, the governor who is elected in this November 4 election, will have the power to determine the entire balance of the Florida Supreme Court.”

In 2018 Justices Barbara Pariente, Peggy Quince and Fred Lewis all turn 70, the mandatory retirement age for Florida Supreme Court Justices. The constitution allows them to serve out the end of their terms.

This isn’t the first time the situation has come up. In 1998, during the transition between outgoing Governor Lawton Chiles and incoming Governor Jeb Bush. The two men settled the issue by striking a deal on Justice Quince’s appointment. But as Florida State University Political Scientist Carol Weissert says, those were different times, and in today’s hyper-partisan political climate, such a deal would be much harder:

“It’s going to be interesting , the 60 percent rule, because political science would say the more complex a proposal the least likely it would be, to be accepted. If it doesn’t get the 60 percent, I’d say it was because it’s more complex, and difficult to explain," she says.

Amendment Three, formally called, “PROSPECTIVE APPOINTMENT OF CERTAIN JUDICIAL VACANCIES” needs 60 percent of voters to say yes in order to be approved. It would impact both state supreme and district court vacancies.

Sunshine Economy: Amendment 1 - Paying to Protect Florida By the Acre and the Gallon

Almost three and a half million acres of Florida are under the state's care. The federal government is responsible for another three million acres. County and local governments plus special districts such as water conservation and management areas have 3.4 million acres under their control.

Polls show Governor Rick Scott and former Governor Charlie Crist are polarizing. Voters are as likely to dislike the candidates as they are to approve of them.

So both candidates are talking about schools, colleges and scholarships -- to motivate their supporters.

“Education is an issue that is helping to appeal to the base," says Sean Foreman, a Barry University political science professor and chairman of the education committee for the Greater Miami Chamber of Commerce.