Florida conducted its first Florida black bear hunt in more than two decades this year. The goal was to kill 320 bears. The Florida Fish and Wildlife Conservation Commission wanted to control a population that rebounded after 41 years of conservation efforts.

Animal advocates called the hunt “immoral.” They said recent bear-human conflicts were the result of habitat loss and depletion of food sources. Activists tried to stop it in court, but lost. 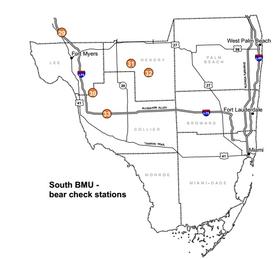 The hunt lasted two days in late October. The FWC sold almost 3,780 bear hunting permits. The number is larger than the roughly 3,500 bears estimated to roam the state.

The final count of bears killed during the hunt was 298.

Hunters had to bring their bears to a "check" station within the first 12 hours of making their kill.

Animal advocates from across the country were also there.

This is what they saw…. 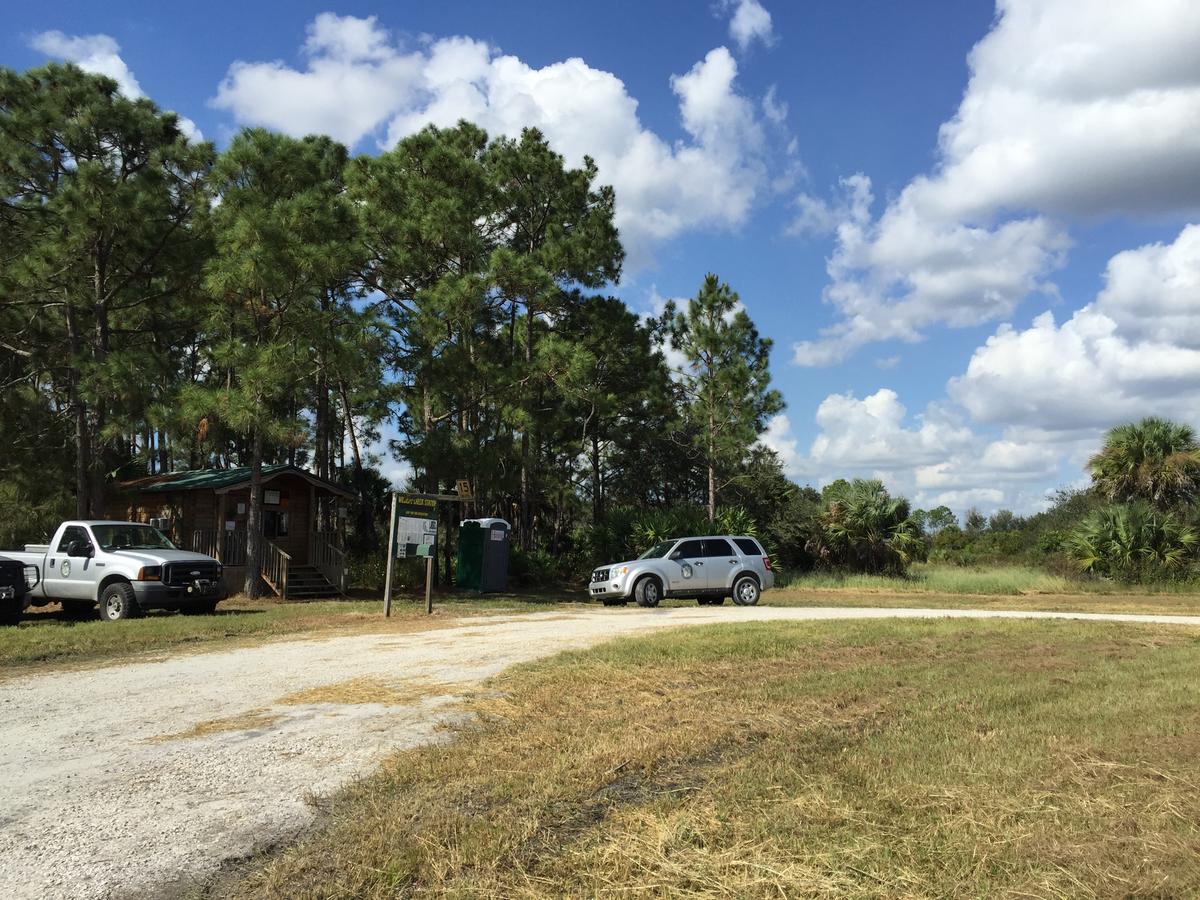 Station 31 is off a gravel road in Okaloacoochee Slough State Forest.

It’s on a U-shaped road. Enough of the natural greenery is cleared to fit a small, wooden structure with a green roof. It sits in the middle of the “U.” Behind it, is a thick wall of untamed plants and tall trees.

To the building’s left, is a row of Florida Fish and Wildlife Conservation Commission trucks.

A black truck is parked to the right of the wooden structure, near a bear weigh-in station. A circle of men in camouflage shirts and dirty jeans are behind the truck.

In the middle of the circle, is a freshly killed female bear. She’s chocolate-colored and weighs 200 pounds.

They are first to check a bear at this station since the hunt began.

He went hunting around 6 a.m. Dupree shot the bear an hour and a half later.

“We got on the dyke where the bear traveled. She come up, gave us a shot and we took it,” he said.

Dupree grew up hunting in Immokalee.

Click below to hear what hunting means to him.

FWC biologist Tiffany Thornhill also stands over the bear. She’s wearing gloves and sunglasses. She keeps referring to a data collection sheet she’s never had to use before.

State biologists are at each of the 33 stations across the state. They take samples like teeth and hair. They say it helps them understand Florida’s bear population.

Dupree and his hunting buddies lift the bear off the blood-stained ground and into the bed of his pickup.

He plans to turn his catch into a rug and freeze her meat. Dupree drives home to show his family the prize.

We wait on a picnic table just three steps from where the bear once laid. The sun rises and it gets hotter. The bear’s red blood turns brown on the ground. Animal advocates pull up. First one car, then a second and a third.

By 1:30 p.m., a handful of hunters came and went, stopping to talk with FWC officials. But they bring no bears.

Some of the animal advocates answer phone calls and race into their cars. They’re headed about 20 minutes away to station 32 where the bears keep coming. 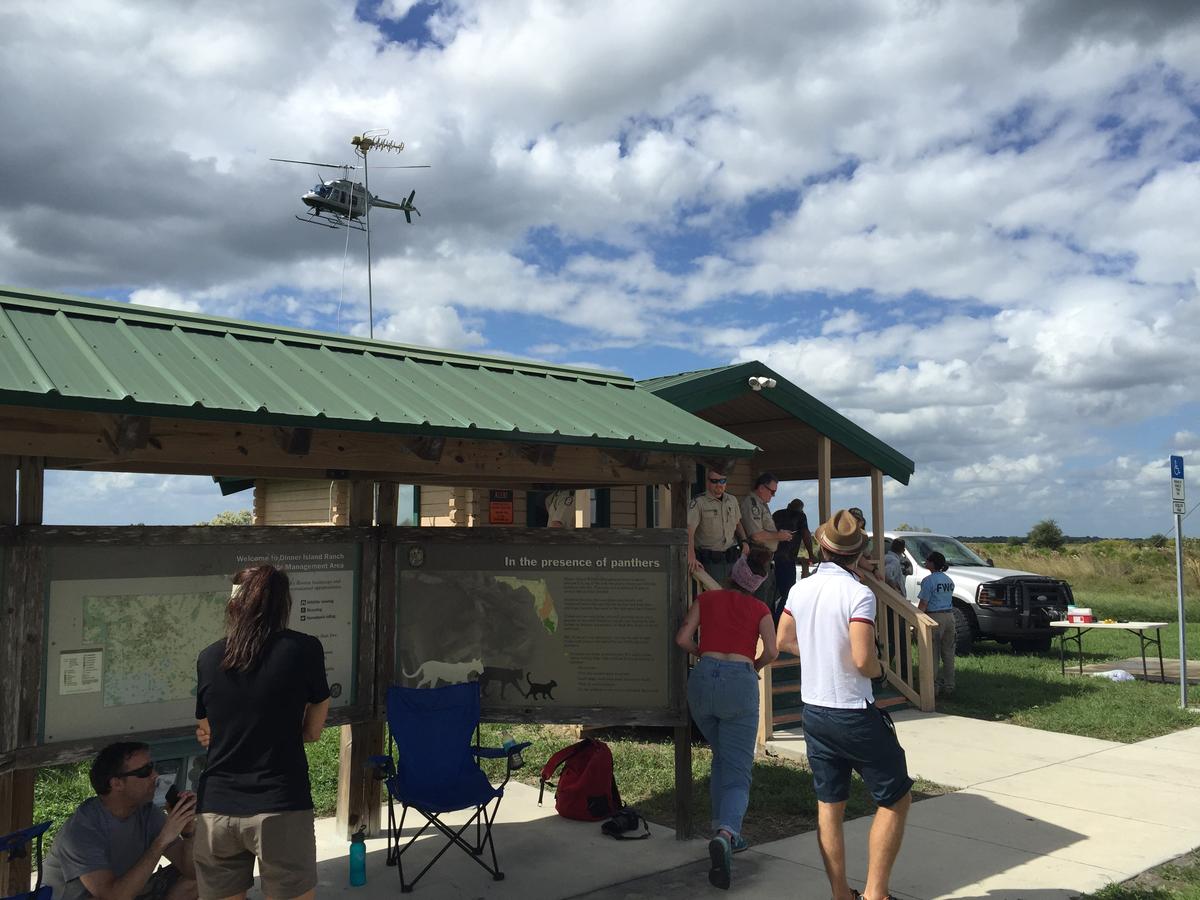 It’s off of an unpaved road and it also has a small, wooden structure with a green roof in the middle of a cleared lawn.

Five bears have come through this check station. When we park and get out of the car, advocates rush to us.

Their tears have not completely dried. They’re upset after a hunter brought in an undersized bear carcass—it’s illegal to take black bears under 100 pounds.

The activists claim it was just a cub.

They show us photos from their camera. But FWC law enforcement numbers show there were no reported violations in the south region during the hunt.

One FWC official chats with some of the advocates who are taking shade under an informational stand to the left of the wooden structure.

They laugh a little. The official says he’s leaving to play a gig with his band later that night. 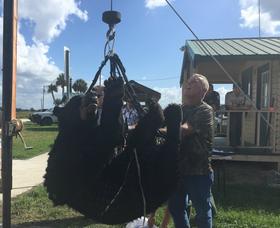 He gets into his car, and the voices get quieter. The bridge between the two groups just drove off.

The rest of the FWC officials stay near the wooden structure.

A white pickup rolls through with a 524-pound male bear in the bed shortly after we arrive. An FWC official quickly walks up to advocates and reporters, saying to keep a fair distance away from the biologist inspection process. He says it’s for our own safety.

Activists take turns reaching into the pickup’s bed, placing a hand on the dead bear’s head.

It takes a flurry of ropes, nets and grunts to haul the massive bear off the truck.

Hunter Carmen Flesher and advocate Anthony Rogers-Wright were both there.

Click below to hear them describe the first day of Florida's bear hunt in their own words.

We walk away from the bear’s carcass, passing the hunters, the wildlife officials and the advocates.

The season would close about 24 hours later.

It was the most controversial Florida hunt in recent memory. 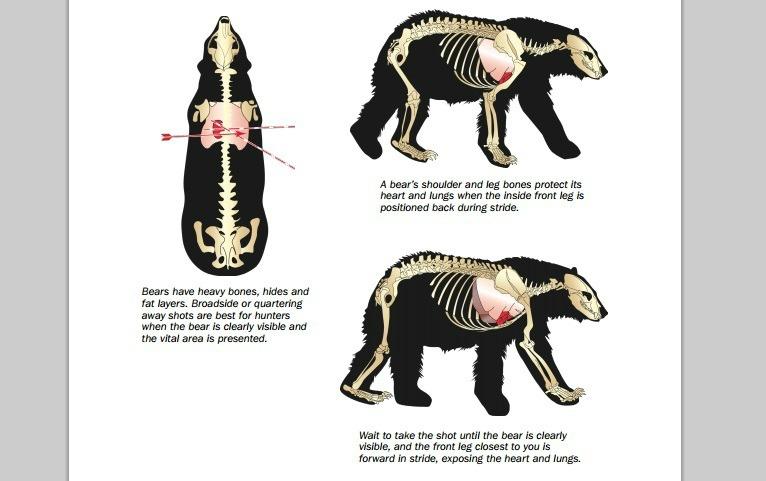 The hunt ended with a total of 298 bears killed.

It was spread out among four regions called Bear Management Units or BMUs.

Each BMU had a “harvest objective” the Florida Fish and Wildlife Conservation Commission hoped to reach.

FWC Executive Director Nick Wiley described the objectives as “conservative.” He said they were meant to be a buffer that would not significantly reduce the bear population in each BMU.

By the end of the first day, the Central and East Panhandle BMUs closed.

The East Panhandle almost tripled its harvest objective from 40 to 112.

Dr. Thomas Eason, FWC’s Director of Habitat and Species Conservation Division, said they did not expect hunters to reach the quota so quickly. Still, he was not worried.

Chuck O’Neal is the Director of Speak Up Wekiva. It’s a volunteer nonprofit that asked a court to halt the hunt. It also sent volunteer monitors to every check station.

More than 1,000 hunters indicated they would hunt in the East Panhandle BMU.

“How could anybody with a 5th grade mathematics education not know what was about to happen? It’s just mind boggling, so to say that... the reason why there were so many taken in the panhandle is that the population is much larger, that is just borderline crazy,” he said.

The state closed all the BMUs Sunday, the second day of the hunt. In a press release, FWC wrote it, “had mechanisms in place for daily monitoring of the harvest and season closure, so when the harvest approached the statewide objective of 320, FWC was able to stop the hunt.”

Hover over the map below to see numbers for each Bear Management Unit:

O’Neal said the actual toll of the hunt on the state’s bear population will never be known. He factored in bears that might have been injured, but never recorded and cubs orphaned after their mothers were killed.

FWC’s Eason said they expected some lactating bears to be taken during the hunt. It was not illegal to shoot a lactating female so long as they weighed more than 100 pounds. A spokesperson with the FWC said they’re still collecting data on the number of lactating females taken. 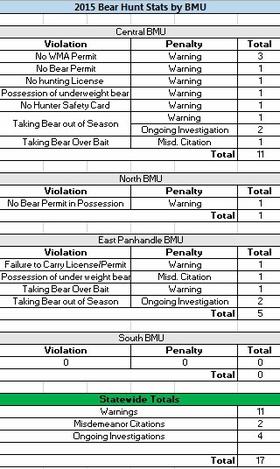 FWC violation reports show only two citations were issued for killing underweight bears. Bears that are underweight are considered cubs according to the 2015 bear hunting guide.

Eason said cubs are born in February and have all of the skills they need to survive by October.

“Cubs can survive on their own out there and we worked with hunters to try to reduce the number of females that were taken... that may have had cubs, but all along we knew there would be some in the harvest,” he said.

Eason said young bears usually stay with their mothers until the following later spring or early summer. Advocate O’Neal said that’s a sign they still have things to learn.

“Human children learn how to eat and drink and go to the refrigerator at 5 but that doesn’t meant they’re capable of being on their own at that age without their parents. So there is knowledge that is imparted from the mother and cub between the ages of 9 months and 18 [months] and they will not get that,” he said.

The state raised $376,900 from the hunters buying 3,778 permits. FWC said they will use that money to reduce human/bear conflicts by focusing on “comprehensive waste management efforts.”

O’Neal pointed to multiple reasons behind recent human/bear conflicts.  Among them is loss of habitat. An FWC report from 2008 said black bears will lose 2.3 million acres of habitat by 2060 based on human population growth estimates.

He said development and road kills curb the bear population.

Eason said the average number of road kill over the last three years has been 225 bears statewide.

On a call midday on the second day of the hunt, FWC officials recognized this is the first time the agency has permitted a black bear hunt in more than two decades.

Diane Eggeman, FWC’s Director of Hunting and Game Management Division, said they will take what they learned from this hunt and adjust the “management for the future.”