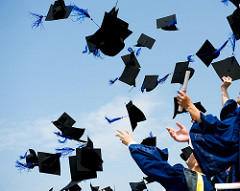 Florida’s Bright Futures scholarship program may be getting a $25-million boost. Lawmakers will consider a request next week by the Department of Education to increase funding due to higher-than-expected student participation.

The News Service of Florida reports the program got $520-million this year for merit-based scholarships to high school students who attend a Florida college or university.

The requested increase comes as student loan debt has jumped in Florida in recent years. Orlando, Tampa, and Miami are among the top cities nationally that had the biggest jumps.

Listen
Listening...
/
Listen to the interview with SavingForCollege.com's Mark Kantrowitz.

A study released last month by the credit reporting agency Experian finds that Florida’s student loan debt is growing at a faster pace than all other states.

Even so, a separate study by the personal finance website WalletHub last summer shows Florida graduates have less student loan debt overall than the rest of the country.

So why are Florida graduates amassing more debt these days – and are they worse off because of it?

We talked with Mark Kantrowitz, publisher and Vice President of Research at SavingForCollege.com.

Kantrowitz:  The total outstanding student loan debt in Florida is just under $90-billion, and it increased by 35 percent from 2015 to 2018, which is a pretty big jump.

The cause of the rising debt could be not just from college graduates graduating with more debt in Florida, which can be caused by the failure of government grants to keep pace with increases in college costs. It can also be from people moving to Florida and retiring with their student loan debt.

WFSU: So as far as why Florida had such a drastic jump in the last few years and why Florida’s debt is climbing at a faster rate than anywhere else in the country, nothing definitive really (for a cause) it sounds like?

Kantrowitz: There isn’t enough data to point to any particular cause of it, and Florida is one of the top ten states with regard to college students. But that doesn’t explain the increase.

WFSU: Do you see any upside to a student getting this kind of debt in college?

Kantrowitz: We don’t really have a student loan problem so much as a college completion problem. Students who drop out of college are four times more likely to default on their student loans, and they represent about two-thirds of the defaults.