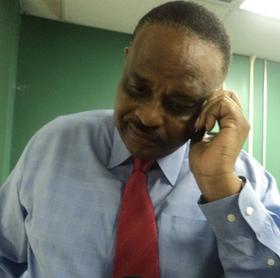 Congresswoman Corrine Brown is planning to move out of a redrawn Congressional District Five, and former state Senator Al Lawson is looking to move in.

Lawson says he’ll file in January to run in the newly configured Congressional District Five. The seat has been redrawn to run east-to-west, from Tallahassee to Jacksonville. It’s currently represented by longtime Congresswoman Corrine Brown. But Brown says she plans to run in a different district that encompasses parts of her old territory.

“She feels disenfranchised by the seat the way it’s crafted," Lawson said. "But to me, it’s a minority access seat. And I’ve never had any more than 26 percent African Americans in a district. This has about 43 percent. So I look forward to running in a seat like that.”

It would mark Lawson's third Congressional bid. He says the changes to District Five have made it more favorable to minorities, and notes that he's run before in many of the North Florida counties represented in the district.

“I think we have an excellent opportunity to have a minority elected in this particular district and it will be very beneficial to this North Florida area," he said.

In 2010 Lawson challenged former Democratic Congressman Alan Boyd but narrowly lost the primary. He ran against former Republican Congressman Steve Southerland in 2012 but narrowly lost in the general election. Southerland was defeated in 2014 by Democratic Congresswoman Gwen Graham. But her Congressional District 2 has also been redrawn, and now heavily favors a republican candidate.

Tallahassee Mayor Andrew Gillum is also weighing a bid for Congressional District Five. A spokesman for  Gillum says the mayor, "is still in listening mode."

Former North Florida Senator Al Lawson is considering a third Congressional bid. A proposed map of the Fifth Congressional district—which encompasses Jacksonville and parts of Leon County-- could give Lawson an opening.

Holloway had to compete with none other than Brown herself for attention at Hemming Park Monday.

Left And Right Converge On Justice System Reform In Jacksonville

Business leaders, advocates and politicos met in Jacksonville Wednesday to call for solutions to mass incarceration.

The progressive and conservative mayors found themselves meeting in the middle.