In Florida's high profile, tightly contested governor's race, the focus is squarely on South Florida. On Thursday, one candidate went as far south as he could go.

About 500 people turned out Thursday morning in Key West to see Tallahassee Mayor Andrew Gillum, the Democratic candidate for governor.

With a relatively small population and number of voters — about 53,000 are registered to vote — the Keys don't usually get a lot of attention from candidates for statewide office. 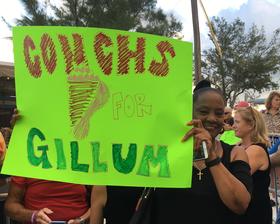 About 500 people turned out Thursday morning in Key West to see Tallahassee Mayor Andrew Gillum, the Democratic candidate for governor.

Gillum said it was worth coming to the Keys less than a week before the election, even though Monroe County went Republican in 2016, by a margin of 51 to 44 percent.

"I want the folks in this community to know that I want to be their governor too, and I'm here to compete for their vote," he said.

Gillum said he had recently campaigned in the Villages, a Republican stronghold in central Florida. He says it's worth seeking votes even if he can't turn an entire county from red to blue.

"The truth is, is there are a lot of red counties that we won't win. As much as I would like to win them, we just have to lose them less," he said. "And part of losing them less is by shrinking those margins, and by pumping up our vote share."

Gillum was scheduled to continue campaigning throughout Miami-Dade County on Thursday, ahead of an appearance there with former President Barack Obama on Friday.

His Republican opponent, former Congressman Ron DeSantis, was also campaigning in South Florida on Thursday and his running mate, state Rep. Jeanette Nuñez, was scheduled to be in the Upper Keys Thursday afternoon.

Trump Rallies For Rick Scott, Ron DeSantis ... And Himself Near Fort Myers

Armed with ominous hyperbole and the aura of “winning,” President Donald Trump flew into Southwest Florida on Wednesday night to whip the Republican vote ahead of Tuesday’s elections and save America from the Democrats.

Less than a week from an election that could propel him toward reelection in 2020 or ensnare him in a fight for political survival, Trump warned the Sunshine State faithful that an Andrew Gillum governorship would take Florida’s purring economy and turn it into a Venezuela-like recession.