Governor Ron DeSantis spent the day touring the state announcing big changes to the way his office will handle water issues. He started by signing an executive order to dramatically increase funding for the Everglades, algae research, and a ban on hydraulic fracking. He ended the day in Stuart, Florida announcing he had asked for the resignation of every board member at the South Florida Water Management District.

The morning began with a quick boat tour of the Little Hickory Bay behind Bonita Beach, where governor Ron DeSantis stood, flanked by conservation leaders, a fishing boat captain, and state legislators. After docking, he signed an executive order to spend 2.5 billion dollars on work and research to solve water flow problems, algae blooms, and other environmental concerns.

“That represents one billion dollars more than the previous four years,” DeSantis said.

His order also calls for the appointment of a “Chief Science Officer” and moving enforcement of environmental law under the jurisdiction of the Department of Environmental Protection- as opposed to the Fish and Wildlife Conservation Commission; which oversees enforcement now. Two moves that stood out to Conservancy of Southwest Florida President Rob Moher. 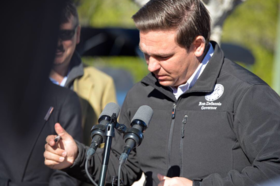 The governor also expressed frustration with the Army Corps of Engineers, and his executive order includes language holding that agency to account.

“We want them to understand the effects that the blue-green algae has had on the coastal communities and to do everything in their power – which I don’t think they’ve done so far- to mitigate that,” DeSantis said.

Later in the day at a stop in Stuart, DeSantis announced he’d sent a letter to every member of the South Florida Water Management District board thanking them for their service, and asking for their resignation – effective immediately. 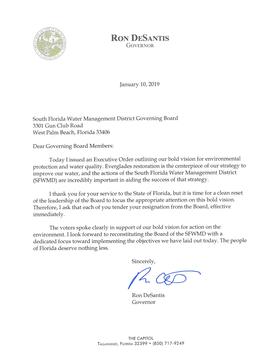 This is the same board that, just before the election late last year, approved to lease 16,000 acres – which was to be used in the EAA Reservoir Project – for farming by New Hope Sugar Company through 2027.