Is Help on Tap for Florida's Springs? 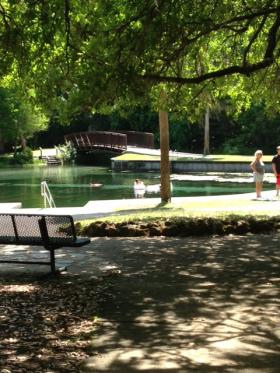 A comprehensive bill to protect and restore Florida's natural springs has been moving through the state senate with strong bipartisan support. Support for springs in the Florida House, however, is far less certain. Still, it's the biggest burst of momentum and  public attention concerning these natural wonders in recent memory.

James "Rip" Oldfield has been manning the concession stand at Rock Springs for the past 12 years. And he's owned the nearby inner tube rental for much longer -- 28 years.

He says he's noticed some changes at the park.

The algae is thriving on nitrates -- nutrients that seep into the water from  leaky septic tanks, or from fertilizer runoff from agricultural lands and residential areas.

Rock Springs is unusual because the water doesn't bubble up from the ground, it shoots out of a cliff -- and at least there at the outflow, the algae can't take hold.

The water for Rock Springs flows from a five foot wide cavern at the bottom of a limestone cliff. The clear, blue water  rushes through a forested ravine for several hundred feet, where part of the water is diverted to a wide, shallow swimming area. The run travels for several miles, before meeting up with the Wekiva River.

At the head springs, Lee Chapman gets ready to go tubing with his baby daughter. Chapman has come to Rock Springs all his life, and says it still looks good -- especially compared to some of the other springs he visits. But he's also noticed changes in the algae level, he says.

"Probably in the early nineties is when I first started noticing that," Chapman says. "But if everybody's running on septic tanks, there's no way to control it until everybody's on a system where the water's at least being treated."

Besides nitrate levels, scientists are also concerned about the amount of water coursing through the springs, or, their "minimum flow levels." The springs have to maintain a certain level of water to stay healthy -- and that level is affected by  drought, but also by the amount of water that we siphon off the aquifer.  Although Rock Springs water levels are okay, many springs are critically low.

Environmental officials say we need more projects that reclaim water -- so that less needs to be taken from fresh groundwater. Other priorities are treating sewage, limiting fertilizer use, and addressing septic systems used by homes near the springs.

The springs bill in the senate  would devote more than $370 million to speed up those kinds of projects, while setting up protection zones around some of the more popular springs. But several prominent business groups are opposed to it, and a companion bill in the House has gone nowhere, so far.

Still, those close to the issue say there's a current groundswell of support for springs,  including from Gov. Rick Scott, who requested money for the second year in a row to help the ailing waters. Drew Bartlett, deputy secretary for water policy for the state's Department of Environmental Protection, says springs are getting a lot of attention right now.

"We are setting and actively working in every springs basin right now," Bartlett says. "There's a lot of springs in the state and we're in every one of them. We're setting regulatory goals and adopting regulatory plans to get these things back into shape."

Bartlett says a lot of clean-up efforts have been put in place just within the last three years , including a $250 million dollar wastewater treatment project near Wakulla Spring that has brought the nutrient levels at that spring down nearly to restoration levels.

Bartlett says that increased funding from the legislature would definitely speed up the ability to do projects like that -- but he says the state will make progress,  with or without this year's springs protection bill.

For Rip Oldfield, and his customers at Rock Springs, progress would mean an end to the algae and a return to the beautiful, clear, white sand spring that they remember.

Remediation Of Hogan's Creek Among Goals Of New Jax Nonprofit

A Jacksonville nonprofit set to start operations by the end of this summer has their sights set on the environmental remediation of Hogan's Creek.

Environmentalists around the state are protesting two bills in the legislature they say will lead to more algal blooms in the St. Johns River and other waterways.

Fresh water springs all over the state are facing  an increasing number of problems, from over-use of the aquifer to over-fertilizing.

Silver Springs is arguably in the worst condition and activists are concerned a permit to allow pumping from the springs for a nearby cattle ranch could be a breaking point if it is approved.

TALLAHASSEE (The News Service of Florida) — An effort to grant in-state tuition to some undocumented immigrant students appeared all but dead Thursday, as Senate Appropriations Chairman Joe Negron, R-Stuart, announced his committee would not hear the bill next week.

Jacksonville brewers are weighing in on a slate of bills being considered by state lawmakers, including a proposal that would require them buy their own beer back from distributors before offering it to customers.

One Spark Creators Focused On Sustainability

Many of the ideas being exhibited an One Spark have a focus on environmental sustainability.