How An Arts Program Is Changing A School's Culture

Correction: An earlier version of this story identified Michael Kamen as the director of the the film, Mr. Holland's Opus. He in fact is the composer who wrote the film score. 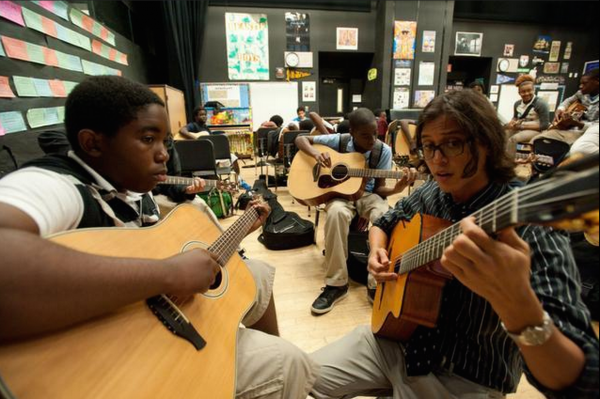 When Jonathan De Leon left his home state of New Jersey to teach at North Miami Middle School in 2007, he immediately saw possibility — both in the school and the students.

A post-graduate teaching job in an affluent neighborhood in Philadelphia quickly convinced De Leon that North Miami Middle — persistently a low-achieving school, according to the Education Transformation Office, an arm of Miami-Dade Schools that supports targeted schools — was the place he could make a significant impact.

When he arrived, De Leon says he remembers a “nonexistent” music program with no instrumental electives and an over-enrolled chorus class, the only option available.

“I started here in 2007 as a social studies teacher and it was both challenging and wonderful,” said De Leon, 28. “Teaching history was great, but my passion has always been music.”

That passion gave impetus to what administrators, teachers and students at the school are calling a culture change: a transformation that started with the music program.

There are fewer custodians and support staff in Florida public schools than there were in 2007.

A StateImpact Florida analysis of jobs in Florida public schools shows that while full-time staffing is almost back to pre-recession levels, one group of employees hasn’t come back: the support staff.

The Kennedy Center for the Performing Arts is partnering with Duval County Public Schools to enhance arts education for students in kindergarten through eighth-grade.

Kennedy Center Vice President of Education and Jazz Darrell Ayers said the coming nine months will be spent talking to educators, business leaders and arts groups about what the partnership will entail.

Why Florida Educators Want To Change Arts Accountability In Schools

When Allison Rojas looks at a painting by Alice Neel, the high school junior sees more than a seated woman in a purple sari.