How The Elections Bill Will Impact South Florida Voters 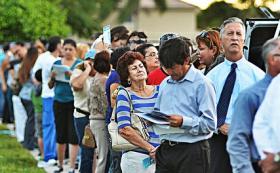 Listen
Listening...
/
Lawmakers and a political analyst take us through the changes in Florida elections law.

Many South Florida voters were still in line to cast ballots during the 2012 election hours after President Barack Obama had been declared the winner.

Elections supervisors blamed the length of the ballot and fewer days for early voting as reasons for the long lines in some areas.

So, the Florida Legislature has passed a bill to undo some of the election changes they made two years ago.

But Democrats say it's not enough.

Alfie Fernandez waited in line for hours to vote at the West Kendall Regional Library.

“At my daughter's elementary school, my friend went and she told me she only waited for 15 minutes. But here – disaster,” Fernandez said. “Every single day it was like this.”

Democrats blame election law changes made by the Republican-controlled Legislature in 2011 that included a reduction in the number of early voting days.

Sen. John Thrasher, R-St. Augustine, said lawmakers rolled back some of those changes thanks to input from elections supervisors.

“The things that they wanted, that they felt would give them the greatest number of tools to do their job for the citizens of this state are in this bill,” Thrasher said.

“If someone chooses to do what happened last time in early voting and have eight days and have lines around the corner and only have it at libraries,” Braynon said, “the supervisor of election has the option to do that.”

Lawmakers chose not to require the longer hours after hearing from supervisors in small and rural counties.

"Small counties do not have the same demands as your big counties. So many of these proposals are really aimed at the large, diverse, big counties,” MacManus said, “and the smaller counties would say we don't need that.”

One provision that was stripped from the bill would have punished elections supervisors who fail to adequately perform their duties. It was recommended by Sen. Miguel Diaz de la Portilla, R-Miami.

“We had a lot of talk here, a lot of talk about what we need to do in terms of reforming the process so that we don't have the problems that five counties out of 67 suffered in the last election cycle,” Diaz de la Portilla said. “What this does is send a strong message of accountability to that supervisor of elections.”

Five counties, including Miami Dade, had various problems last November, from equipment malfunctions to a flood of absentee ballots.

But lawmakers didn't like the idea of Florida's appointed Secretary of State being able to punish an elected county supervisor.

Bradenton Republican Rep. Jim Boyd says measures are in place to handle those who don't perform up to par.

MacManus says this bill comes down to both political parties seeing a need to do something.

“Nothing pushes legislators to action more than national embarrassment, and that's what happened to Florida on election night,” MacManus. “There were a lot of these Republicans who heard from their Republican county supervisor of elections what was wrong.”

Gov. Rick Scott pushed for the changes lawmakers made in 2011. Now, he said he'll sign the bill to undo some of those changes.