How Miami-Dade Commission Plans To Fund Libraries Without Raising Taxes 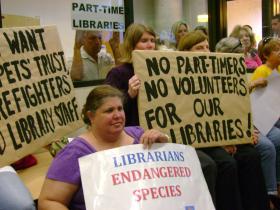 In July, commissioners voted to hold the line on taxes, but that meant laying off firefighters, abandoning plans for a no-kill animal shelter and cutting hours, services and jobs from the library system. In the weeks that followed, all three became hot issues, but it was the libraries that dominated Tuesday night's public hearing. Librarian Jennifer Lopez said patrons would be devastated.

Others warned that gutting libraries would deprive children of safe spaces, increase unemployment and make the county unattractive to relocating businesses. Some libraries would have been open only four hours a day, four days a week. Commissioner Dennis Moss found it appalling.

“We are priding ourselves on wanting to be that world-class community,” Moss said. “And we just in my opinion can't continue to go this particular route.”

Under the plan adopted early this morning, taxes stay where they are but reserve funds will be tapped to keep all libraries open for a full schedule. But Mayor Carlos Gimenez said there would still be damage.

“That’s not going to be with the same staffing, that’s impossible, the money is not there,” warned Gimenez.

But he said displaced library staff will be first in line for other county jobs. Commissioners take their final budget vote later this month.

As for those pets and firefighters, commissioners have agreed to increase funding for animal services -- again, with no tax hike -- and hope for a federal grant to keep all the firefighters on the job.

StateImpact: School Nurses Aren't What They Used To Be

For a growing number of students across Florida, a visit to the school nurse isn’t what it used to be. Many schools now have clinics with doctors and specialists available during school hours. There’s evidence that what’s good for students’ health is good for their grades.

The Jacksonville City Council Finance Committee has restored funding for the Brentwood and Maxville libraries. Both were slated to close October 1.

Faced with big budget cuts the Library Board of Trustees had recommended their closing. The trustees told the committee last week that the Maxville branch is the least used library in the system and Brentwood is in disrepair.

City Council member Johnny Gaffney said any disrepair problems are the fault of the city. He says the Brentwood is too important to the community to be closed.