How Will A Million Felons Get Registered To Vote? 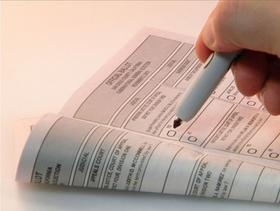 Select felons who’ve completed their sentence will be eligible to vote come January 8th, following the passage of amendment 4. As Blaise Gainey reports Elections officials met this week to discuss how to add the roughly 1.5 million extra voters to the list.

On December 4th, when officials from the Division of Elections met with supervisors from Florida's 67 counties in Sarasota they faced several questions on if or when their registration process would change. Ion Sancho, former Leon county supervisor of elections, says county supervisors' procedures shouldn’t change.

And Florida clemency lawyer, Reggie Garcia, believes local processes should be similar to registration for non-felons.

“Remember there was an exclusion for murder and sex offenses. Number one: they have to complete their term of sentence; and number twothey have to complete form 39 or whatever its successor is and turn that in January 8th, 2019 or thereafter when Amendment 4 is effective,” he said.

But some state officials have other ideas. Secretary of State Ken Detzner says he believes the legislature should provide guidance. Garcia says, “because the constitutional amendment uses the word shall twice after the completion of sentence I think it’s less open to interpretation and more likely to be self-executing.”

Some worry the implementation of the bill could be slow-walked by the legislature because of politics. Sancho pointed to the elections aftermath as an example.

“In the recent controversies with the actual governor making these outlandish statements about fraud and ballots from nowhere, which basically was rebuted by the Florida department of law enforcement themselves,” said Sancho.

Community Advocate, Neil Volz, who is also a felon, says he and others are hopeful politics will not delay the will of the voters.

“Well were hopeful that we can walk this out together. We believe people when they say they want to adhere to the will of the public who overwhelmingly supported Amendment 4 and very clearly said when a debt [is] paid its paid and when somebody's paid all portions of their debt back, they can be eligible to vote," said Volz.

Ultimately Volz says he expects no matter what happens, January 8th will be a celebrated day.