'I Was Right There': Herb Snitzer On Life Behind The Lens

In his memoir, "Glorious Days and Nights," Herb Snitzer wrote that his camera allowed him to experience things he couldn't have dreamed of.

From late night ping pong games with Thelonious Monk to winning a lifetime achievement award from the NAACP in St. Petersburg, the photographer has seen a few things in his 80-plus years.

And he was there to capture it all in pictures.

"Timing is everything,” he said with a laugh.

Snitzer’s photographs hang on the walls of the country's most important museums. The newest exhibit of his work, “Can I Get A Witness: Photographs by Herb Snitzer,” is now on view at The Museum of Fine Arts in St. Petersburg.  The St. Pete resident is a Philly native and was drafted to serve in the Korean War before receiving a diploma from the Philadelphia College of Art in 1957.

"And the day I graduated,” he recalled, “I got my brother's Mercury and drove to New York and never went back."

Snitzer arrived in New York just in time to experience the bohemian atmosphere blossoming in Greenwich Village in the late 1950's and early 60's.  At the time, the neighborhood was home to a collection of poets, artists and musicians that are now considered to be cultural icons.

"I was right there,” he said, seemingly marveling at his own good fortune. “It was a time of transformation. It just was magical." 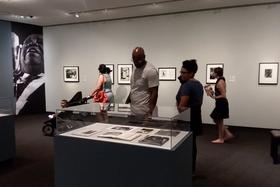 Snitzer says he got his first job by opening up a phone book and cold calling photographers. He was soon hired as an assistant for forty dollars a week, and on his days off, he worked on his own photographs.

"In those days, photographers always had their camera around their neck and I was no exception,” he said.

Because the magazine industry was the dominant medium of the era, it didn't take long for Snitzer to start making a living as a full time photographer. As an artist, he took inspiration from French photographer Henri Cartier-Bresson, an early pioneer of candid photography as an art form.

"He tried to get the image in one exposure. No cropping and no changing of the light," said Snitzer. "I thought that was an interesting aesthetic and I said to myself, I'm going to try and see if I can do that. After about a year, I realized I was pretty good at it.”

Snitzer is also keen to point out that photographers do not ‘take’ photographs. As Ansel Adams once said, they ‘make’ them.

“You take a shower, you take a bath, or you take a ride,” Snitzer said. “But you take a photograph? That just doesn’t make sense. You make something."

Through the decades, Snitzer became known for his images of jazz musicians but he also focused much of his work on social justice. 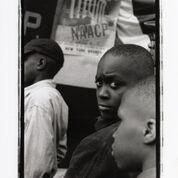 Several of those images are included in the MFA exhibit in St. Pete. One photograph entitled "NAACP" is of a 1958 civil rights protest and foreshadows the artist's volunteer work with the NAACP in St. Petersburg, which awarded him a lifetime achievement award in 2005.

Snitzer moved to St. Pete in 1992 and can still be seen around town documenting the world around him.  He has taken photos at the annual St. Pete Pride event for years and also shot the historic Women's March in  January. The photographer is still engaged in community activism and credits his involvement with the city's Quaker congregation has inspired his evolving world view.

"I think I'm less intense,” he said. “I think I'm more caring for others and I work at it all the time, even at this age."

Snitzer said throughout his life, he's often wondered why people make art. At the age of 86, he's said he may have found the answer.

"I think it's because they want to be known a hundred years from now,” he said. “Most people are gone after three generations, just forgotten. I find that really sad."

So, he said, maybe all he's really doing is saying that he wants to be remembered.