Four eighth graders prepare to set off on a board game based on the book “Everlost” – set in a fantasy world between life and death inhabited by “afterlights.”

Assignments like this are one reason International Baccalaureate programs are growing in popularity.

It started in Switzerland in 1968, and the curriculum is the same in schools all over the world.

The Florida League of International Baccalaureate Schools says students in the Sunshine State are more likely to have access to IB classes than any other school system in the world.

Florida has pushed students to take more challenging courses to make sure they are ready for college or the workforce.

“Every player must choose one character,” Urquiza reads, “and once you have chosen a character go to the table of contents to see what page your player is on."

Students were asked to create a role-playing game – where players live in the heads of the characters they’re playing with.

In this game, the players face a series of scenarios as they move along the board. They make a choice, and the outcome is decided by a roll of the dice. Their choices are supposed to be based on the character’s motivations and actions from the book. 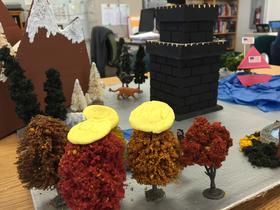 The teacher is Bridget Kinney. She says the game assignment is representative of the International Baccalaureate philosophy.

“They use critical and creative thinking skills," she says. "They use collaborative skills. They use communication skills... in every class. And that is a really big part of IB education.”

School districts have added IB programs for a lot of reasons.

International Baccalaureate has helped desegregate schools. In 1980s, the Pinellas County school district was under a federal court order to desegregate. So it opened Florida’s first IB program at St. Petersburg High to attract white students to the mostly black school – and it worked.

And demand is growing for IB programs in middle and elementary schools – like the one at Ada Merritt K-8.

Kinney says she likes the program’s philosophy – like forcing students to stop and reconsider their work by watching classmates play their game.

“They were able to see what problems they hadn’t anticipated and go back to the planning stage to solve them,” she says.

Back in the world of "Everlost," just as Alexander Otero is about to win the game, he runs into a problem. The Marauders block his way.

“OK, you have to get an even number on the dice to beat them, but remember if you get an odd number you go to the start,” Urquiza warns him.

He rolls the dice. Five.

He has to go all the way back to the start.

When it’s time to tell classmates what they thought of the game, Theo Urquiza points out the trap at the end.

“I did that specifically at the end for that specific purpose,” says Julian Roch-Hernandez, from the team that created the game. “So that you’re like, ‘Oh man, I have to go through the board again.'”

Kinney says she liked how many different kinds of games her students came up with. One had an elaborate map, while another had no board at all. All the games captured the essence of the books.

The next project? Making animated videos using paper cut-outs -- like the early episodes of “South Park.”