'It's About The People': Installation That Recreates Protest Signs To Hit The Streets During Basel

Jason Lazarus is turning protest into art in Miami.

His installation, “A Century of Dissent: Miami!,” is tucked inside a former downtown Miami mall that Mana Contemporary uses as an arts center. Lazarus, a photographer by training and now an art professor at the University of South Florida in Tampa, invites the public to reconstruct protest signs used locally in the past.

“I like to think of the project as simultaneously about past, present and future," he said. "The study or the embodiment of the past loses its value if we don't think of ourselves as present artists or citizens." 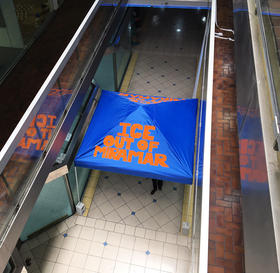 Most of the works in the project are from protests held in recent years.

For example, the orange message “I.C.E. Out of Miramar” is emblazoned on a makeshift blue tent. The works were from a July 2018 rally in which immigration activists called for closing the Miramar ICE facility amidst the Trump administration's controversial family separation policy. Other signs criticize gentrification in Little Haiti and political leaders such as Sen. Marco Rubio and Venezuelan President Nicolas Maduro.

Lazarus spoke with WLRN’s Alexander Gonzalez about the project and how it will take the streets on Sunday as a procession – an homage to the signs’ original purpose as performative politicking.

WLRN: On Sunday, you're going to have this procession. What does that look like? I'm imagining some kind of parade, right?

LAZARUS: The procession is a way to take these signs off the wall or out of an installation context. It allows us a chance to celebrate the signs that have been recreated so far.

When did you first become aware of protest signs?

I studied photography at Columbia College in Chicago, and my photography led me into concerns of social justice. Those concerns then led me to protest signs.

During Occupy Wall Street I was fascinated by the speed and the complexity of the event. I had traveled some and been able to attend gatherings in New York City, Chicago and Tampa. But it occurred to me that I didn't want to go to the protests and be focused on just collecting physical signs. I thought to myself, If I recreate protest signs based on images that I was seeing online, that not only could I collect the signs, but I could collect signs that were popping up simultaneously all over the world. 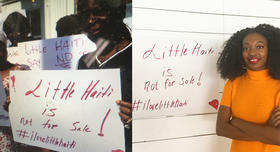 One of them is "Little Haiti is not for sale. Hashtag I love Little Haiti."

This protest site was used in December 2015 as Art Basel was approaching. In this case, there was a coalition of community activists, business owners and residents who had a message for the developers that they don't want Little Haiti to become the next Wynwood.

You've done a version of this project in Harlem. I'm wondering, how was that experience different from what you're experiencing in Miami?

There are more similarities than differences. One of the hot topics of discussion and protests in East Harlem, where I was in residence, was essentially gentrification concerns. Both Harlem in New York City and Little Haiti in Miami have a shared sense of urgency and in fact are in the midst of these transformations.

There's another one: a white flag that spells "brutality." 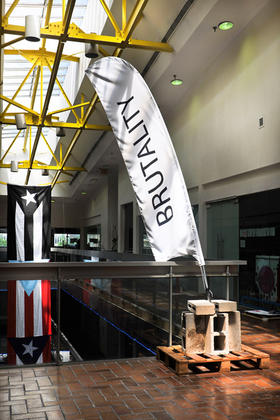 In 2014, there was a demonstration that took place on Interstate 95 during Art Basel. It shut down the highway. This was protesting police brutality. This is a great moment where activists really seize upon the biggest optical moments of a city.

There's a photograph by a Miami photographer Cendino Temé, and he made a whole photo series called "No More Blues." He's given his blessing that a detail from one of his photographs, this feather flag, is being recreated. It's particularly pointed that four years later, a recreation of this 12-foot flag is going to be hitting the streets in Miami during Basel.

Is there any sort of comment on Art Basel in all of this?

Basel already has a robust commercial element that's well established. What a "Century of Dissent" does is it aims to make and broadcast work that is made with the people. It's about the people, and its future is interdependent on the community.