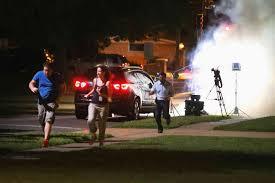 Rioting in the St. Louis suburb of Ferguson -- after an unarmed teenager was shot to death by police -- has brought media attention the likes of which that small community has never seen.

And, reporters have experienced everything from tear-gassing to arrest as they try to cover the story.

Just a day after the president of the Radio and Television News Directors Association sent a letter to the Ferguson police chief asking him to respect the rights of reporters to do their job, two journalists -- one from the Washington Post and one from the Huffington Post -- were briefly arrested at a Ferguson McDonalds.

Why are the First Amendment rights of the press colliding with the authorities they are there to cover?

"You know reporters don't have any special rights. The rights of a free press are mentioned in the First Amendment but those rights are actually confirmed on all citizens in the United States," explained Kelly McBride of the Poynter Institute's Sense-Making Project. "We have pretty well established protocols for being in public places and being allowed to dissent and criticize authority. And reporters have those same exact rights.  What happens is when you get a protest going and police want to try and stop it, they also don't necessarily want reporters documenting their actions. So, from the reporter point of view, it seems like the police are abusing their authority to prevent you from training any more scrutiny on them."

And that's why they arrest of a couple of reporters in Ferguson got so much attention.

"If police are willing to trample the rights of journalists, it lends a lot more credibility to the accusations that they are trampling the rights of other people who have much less power," McBride said. And, she added, "There is a strong correlation between press freedoms and other freedoms. In societies where you don't allow your press to do their work, you really do have a lot of civil rights violations. And that's one of the reasons why we take this so seriously when journalists get arrested or when journalists are intimidated."

Pew Poll Finds Americans More Politically Polarized Than Ever Before

A new report says Americans are more at odds with each other politically than ever before.

Members of the Jacksonville Progressive Coalition plan to show their support for the town of Ferguson, Missouri, where police shot an unarmed, black teenager one week ago.