Hurricane Michael is intensifying rapidly, and now a strong Category 2 storm with winds up to 110 mph. The storm is expected to become a Major Hurricane later today as it accelerates north through the Gulf of Mexico. The National Weather Service says that the Storm Surge from Michael could be “catastrophic”. Evacuations and preparations for the impacts from Michael should be completed in all areas by this evening. 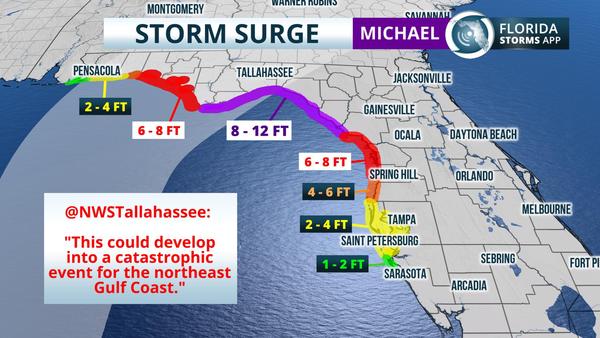 Michael is expected to strengthen rapidly today as it moves through the southern Gulf of Mexico.  The warm Gulf waters near 84F will fuel the hurricane’s rapid intensification to a Major Category 3 Hurricane by tonight.  As of the 11 am advisory, the National Hurricane Center says the hurricane is located 360 miles south of Panama City, Florida or 335 miles south of Apalachicola with winds up to 110 mph.  Michael is moving north-northwest at 12 mph.

Hurricane Michael has started to make a slight curve to the northwest as shown by models. Forecasters from the National Hurricane Center continue to suggest they have relatively high confidence in a landfall somewhere between Destin and Apalachicola. However, timing of this landfall is still a bit in question due to model differences on the forward speed of Hurricane Michael beyond Tuesday. The official National Hurricane Center track has Michael making landfall as a Major Hurricane early Wednesday afternoon. GFS and the European model is a little slower and doesn’t bring Michael inland until Wednesday evening.  If a slower solution materializes, it is possible Michael could weaken some before landfall and even turn a little to the northeast, placing more of Florida’s Big Bend and Nature Coast in line for direct impacts.

The average track error at landfall, which is about 48 hours from the last advisory, is about 74 nautical miles from the center. Potential impacts from Hurricane Michael are likely to spread up to 200 miles from where the eye makes landfall, especially on its eastern side.

A Storm Surge Warning has been issued from the Okaloosa/Walton County line to the Anclote River, which is near the Pasco/Pinellas county line. A life-threatening inundation of water is likely in the warned area, with the height of the water above normally dry ground potentially reaching 8 to 12 feet in areas from Indian Pass to Cedar Key.  In a statement issued early Monday evening, the National Weather Service Tallahassee said water level rises this high could potentially be “catastrophic” to the northeast Gulf Coast.

In his forecast notes supporting the 5 pm advisory from the National Hurricane Center, Hurricane Specialist Dan Brown noted that the location and magnitude of peak storm surge flooding would be “very sensitive to small changes in the track, intensity and structure” of the hurricane.  And since there is still some uncertainty in all of those parameters, the official NHC storm surge forecast included “various plausible scenarios”.

Every county in the Florida Panhandle has been placed under a Hurricane Warning, which also extends into coastal Taylor and Dixie counties. Further inland and farther south along the west coast of Florida, a Tropical Storm Warning was in effect to the Pasco/Hernando county line, and a Tropical Storm Watch extended as far south as the mouth of the Pearl River. 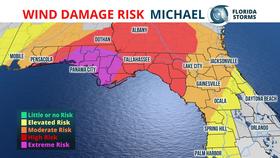 The Hurricane Warnings are issued when winds of 74 mph or greater are possible during the event, but also when tropical storm force winds are likely within 36 hours. When the latter arrives, it will make completing hurricane preparations nearly impossible. Due to the aforementioned uncertainties of the storm’s eventual intensity, track and structure, how extreme the winds may get at any particular location is still a bit difficult to pin down.

What is clearer, however, are when the tropical storm force winds may arrive, and we’ve listed some “most likely” times of arrivals below, from earliest to latest.

Hurricane Michael could produce enough rain over a short amount of time that leads to flash flooding of many low-lying areas near where the storm comes ashore.  Rainfall amounts of 4 to 8 inches are expected over a large area from Panama City to Tallahassee, potentially spreading as far east along the I-10 corridor as Lake City.

Lower rainfall amounts of 2 to 4 inches are expected along the Nature Coast and inland areas of North-Central Florida, but here too locally heavy rain could cause flooding in poor drainage areas.  The story will be similar for areas west of where Hurricane Michael comes ashore, with isolated flooding possible as far west as Pensacola.

Most landfalling tropical storms or hurricanes bring with them a tornado risk, and it’s usually greatest on the right side (or in this case, the eastern side) of the storm’s track.  Outer bands from Hurricane Michael could produce isolated tornadoes with little notice over portions of the Florida peninsula Tuesday afternoon through Thursday. Residents in these areas are encouraged to have a way of being alerted should a warning be issued.

Hurricane Michael has grown into a Category 4 hurricane, with sustained winds reaching 130 mph, as it barrels toward northwestern Florida, making it a much stronger storm than Hurricane Florence was when it made landfall as a Category 1 storm drenching the Carolinas last month, according to the National Hurricane Center.

Jacksonville Mayor Lenny Curry is encouraging everyone in Duval County to stay alert and informed as Hurricane Michael makes its way toward Florida's Gulf Coast.