In Brigette Kinney’s design class at Ada Merritt K-8 center in Miami, one of the key concepts is editing and revising ideas after getting feedback.

Her 8th graders create role-playing games based on books they read. Then they adjust the games  after watching their classmates play.

Kinney hopes Florida lawmakers will be as open to change as her students.

“I feel that legislators are out of touch with what it means to be a good teacher,” she said.

Kinney was talking about the new program called the “Best and Brightest Scholarships.” They're not  actually  scholarships. They're  bonuses for teachers based on how they did on the SATs and ACTs. And they could get as much as $10,000.

To get the money, teachers need to have scored in the top 20 percent when they took their college placement exams. They also have to have earned the state’s top teacher rating – “highly effective.”

Lawmakers in Tallahassee earmarked $44 million in the state budget for the bonuses.

But to get them, many teachers have to track down scores they may not have seen since high school.

The bonuses are supposed to get more top-scoring students to go into teaching.

But there are some problems.

“The law went into effect July 1  and I didn’t know about it because 10-month teachers are on summer recess," Kinney said.

So she and a lot of other teachers didn’t even find out about the bonuses until they got back to school near the end of August, when the deadline to apply was just over a month away.

SAT was swamped by the time Kinney called to get a copy of her scores.

“I spoke to a supervisor who told me that they had been flooded with requests from teachers from Florida," she said, "and he told me frankly that there was no way I was going to get my score report by Oct. 1.”

The SAT and ACT companies said they didn’t get any heads up about the program -- and no one coordinated with them about the deadline.

Both SAT and ACT say their tests are only designed to give colleges an idea of how well-prepared students are,  not to predict who might be a good teacher.

Kinney’s degree is from Florida State University, and she had to send a friend in Tallahassee to go scan and send her records.

But Kinney says that copy of her SAT scores says nothing about how good a teacher she is.

“I think that this also really shows an ongoing misunderstanding by the people who are making education policy about what standardized tests can do," Kinney said. "Who do you want to reward with this program?” 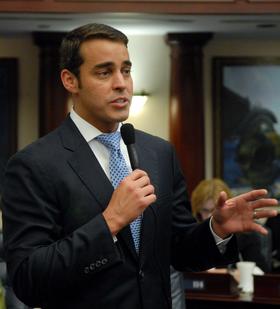 The bonuses are the idea of Miami Republican state Rep. Erik Fresen. Fresen canceled three scheduled interviews for this story.

But in earlier published interviews, he said  he got the idea from a book about education called the “The Smartest Kids in the World.”

In countries such as Finland and South Korea, top students want to become teachers. U.S. ed schools don’t attract as many top students.

“You can’t just hit in the 80th percentile on the SAT and be a nightmare in the classroom,” Fresen told the Miami Herald in July.

But a lot of top-rated teachers aren’t even eligible for the bonuses.

“If you had a high school diploma from Key West High,” said Cheri Mitchell-Santiago, “you literally did not have to have SAT scores to get into the community college."

Mitchell-Santiago teaches journalism and technology at Coral Reef Senior High in Miami.  She began her college education at   a community college;  thousands of teachers get bachelor’s degrees through community colleges in Florida every year.

Plus, Florida has many foreign-born teachers who never took the SAT or ACT.  So they’re not eligible.

Even some teachers who did take the SAT or ACT aren’t eligible.

“I took my SAT in 1969,” said Palm Beach County AP English teacher Tanasi Baldet. “They didn’t even start doing percentile scores until 1973.  For me it’s impossible  to get a percentage score.”

Baldet is Nationally Board-Certified, a rigorous process that she thinks is a better measure of teacher quality than old standardized tests.

“When the first national board came out I was really excited,” she said, “because I thought finally the nation is coming together and we’re setting established criteria by which good teachers, good teaching can be evaluated…and then we let it fall by the wayside.

These complaints are so widespread  the program may only end up lasting one year.

The chairman of the Senate Education Committee also thinks there are better ways to reward teachers.

“The House is pretty passionate about this issue,” said Sen. John Legg, a Pasco County Republican. “The Senate is not even lukewarm, at best. We are very reluctant to go that direction.”

The Florida Department of Education wants to slash the bonus program by 90 percent. And the state teachers union is talking about challenging the law in court.

Some teachers are flat-out refusing the bonuses on principle. But Brigette Kinney said she just couldn't turn down a bonus worth as much as one-quarter of her salary -- even if she disagrees with the idea.

She would like to use the money to pay for a master’s degree – which comes with another salary bump.

“How do I feel about somebody offering to give me a $10,000 raise? Kinney said. "I feel great about that. I should be getting it anyway.”

But Kinney said every eligible teacher should get the bonus – for as long as it lasts.

Miami teacher Brigette Kinney said she doesn’t always hear about school news when classes are out for the summer.

So Kinney missed the word that state legislators set aside $44 million for bonuses based on SAT and ACT scores during a special summer budget session. Teachers who scored in the top 20 percent the year they took the exam and earned a “highly effective” teacher evaluation are eligible.

Know the joke about how many college students it takes to screw in a light bulb?

Probably not, since it’s not a real joke. Nor is the decision some comedians are making to avoid college campuses where they say students today are too easily offended.

Last week the international  Organization for Economic Co-operation and Development released the results of a global study looking at the effect of technology on 15-year-olds' test scores.

The group oversees one of the most important international exams, so its research matters.

Ready Or Not, Students, The New Florida Exam Is Here

Two students are recording the daily announcements, telling classmates when and where they need to be starting today.

"Monday is ninth graders, with last name A to G," one student raps, in a rhyme that's no threat to Miami's Rick Ross.