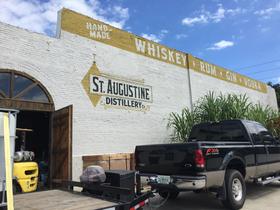 In a second floor office of a warehouse that used to produce electricity and store ice for St. Augustine’s, Phil McDaniel is rooting through a small cabinet.

“So this is,” he begins, “that’s some whiskey, you can see the color, I mean it’s amazing.”

“This is rum,” McDaniel goes on.  He breathes in as he recalls, “this rum was in here for about 30 days.”

McDaniels is the head of St. Augustine distillery.

“We’ve been in the planning stages for five years we’ve been in operations and open to the public since march of 2014—so a little over 18 months,” he says. 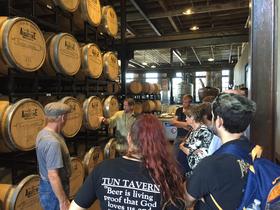 The distillery is probably best known for vodka, but they make gin, rum and their first batch of bourbon is stacked up 6 barrels high in the warehouse.  That may sound like a lot of booze—and it is—but compared to some operations, St. Augustine is tiny.  Take the bottling process.  Instead of those mammoth conveyor systems that crank out a couple million cans of beer a day, the distillery has Leighann Howland.

“Spirits have not really been an industry in Florida ever,” McDaniel says.  “I mean craft spirits anyway have not existed here for very long.  There’s only a handful of distillers.”

Beer and wine are bigger industries and tend to get more attention in state politics.  But McDaniel says distillers notched a big win earlier this year.

“The law that passed this last session,” he says,  “effectively allows a craft distiller—and a craft distiller is defined as any licensed distiller who produces less than 75,000 gallons a year—which is very small as compared to a large distillery, we can sell now up to two bottles per brand per person year.”

Before that the limit was two bottles per person per year.

He says his business is already noticing the impact, and he wants to boost direct sales even more.

“Our sales have been up 15 percent or maybe even 18 percent as a result since July 1 and that’s significant,” McDaniel says.

But here’s the rub.

“We hope over time we can demonstrate to our distributor partners and our retail partners,” he goes on, “that the more product we can sell from here the better it is for them because ultimately that will lead to future consumers.”

Making that case could prove difficult.

McDaniel is hoping to eventually remove any limit on in-person sales, but he and other distillers are likely to face significant push back from those partners in the distribution and retail industries.  Florida regulates alcohol by forcing it through a three-tier system where producers sell to distributors, who then sell to retailers.

Although McDaniel’s sales today may in fact boost business for the other tiers down the road, those other tiers are typically more concerned about the money they’re losing today.

The conflict has played out in heated exchanges at the Capitol.  During the most recent round of committee meetings, Rep. Halsey Beshears (R-Monticello)— chair of the House Business and Professions subcommittee—warned his members they’re likely be in for more of the same in the coming year.

“We’ve tackled several issues y’all know, that are relating to alcohol,” He began looking up and down the table.  “I will tell you now I think we’ll tackle several more this year that may be highly contentious that are regarding alcohol.”

“Matter of fact if I were a betting man, I’d bet on it,” he finished.

Those contentious measures could include proposals for powdered alcohol and the so-called “Whiskey and Wheaties” bill aimed at allowing grocers to sell alcohol without setting up a separate store.  But it’s likely they’ll also revisit bottle restrictions.  Rep. Greg Steube (R-Sarasota) is sponsoring the bill.

“I’ll be filing another bill this year that will repeal that prohibition completely,” Steube said during committee week.  “So it won’t be two bottles per person this, or two bottles per brand or whatever the case may be, it’ll be if you as an individual go to that place of business and you’re of age and you want to purchase a case of whiskey or a case of whatever it is then you should be able to do that.”

Steube filed that measure late last month.  If McDaniel gets his way, it will take effect next July.

For drinkers, good news from Tallahassee: Florida lawmakers have passed a bill granting more freedom to craft distilleries and breweries.

Small-scale beer and spirit producers are seeing more opportunities for growth and exposure.

The St. Augustine Distillery occupies the bottom floor of a 1920s-era ice plant that once produced huge frozen slabs for shrimp boats and homes. Amid the steampunk-looking copper stills and barrels of aging bourbon, co-founder and Chief Financial Officer Mike Diaz says business has blossomed since its grand opening just over a year ago.

Growlers Headed For The Governor

The Florida Legislature may be at odds over Medicaid expansion, but at least it agrees on the long-awaited growler.  The House approved the measure Friday.

The state's record-setting budget goes into effect on Wednesday, along with 130 other new laws that were produced by the Legislature this year in the regular and special sessions and signed by Gov. Rick Scott.

Starting Wednesday, the state will no long collect sales tax on gun club memberships, people with 64-ounce beer containers known as "growlers" can get them filled at breweries, and governments in Florida will have to start looking to buy American-made U.S. flags.