Sen. Nelson: We Need A New Floodgate Policy For the Everglades 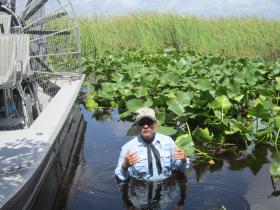 This year’s heavy rainfall has sent water levels in the Everglades to their highest level on record for this time of year.

The high water has caused animals to take refuge on a few tree islands, where they are more vulnerable to predators.

Sen. Bill Nelson (D-FL) and the Florida Fish and Wildlife Commission are calling for emergency action to have the floodgates opened immediately to lower the water levels in the conservation area of concern.

Nelson is asking for a new trigger policy that would allow the floodgates to be opened immediately when conditions hit a certain level.

But this solution is not without controversial. To lower the overall water level in the conservation area, water levels in the canal that runs along Tamiami Trail would have to rise temporarily.

Due to ongoing construction on Tamiami Trail, it may be difficult to bridge the area and the increased water could flood communities south of Tamiami Trail.

Superintendent of the Everglades National Park Dan Kimball said he hopes to meet with the construction contractor for the project about opening the floodgates and letting the water level along the Tamiami Trail rise.

“We need to go and talk to them to see if they are okay with going up to eight feet. Anything above that, they say is going to be a problem,” Kimball said. “With the understanding that it be monitored, and if there’s any problem, then we shut it off.

Sen. Nelson said that if a hurricane hits next week, emergency action might become necessary immediately.

It's a startling prediction — within about 20 years, the First Coast might have to start removing salt from seawater just to provide enough freshwater for residents.

The other option could be to pump more water out of Florida’s aquifer.

These are issues being studied right now by the St. Johns River Water Management District, an area that makes up 18 counties in North and Central Florida.

It's a startling realization for us insulated Americans: diseases from unsafe water and the lack of basic sanitation kill more people every year than all forms of violence, including war.

A basic need we may take for granted in this country, simple clean water, can change lives around the world.

You can be part of the movement to bring clean water to developing countries at a great event happening this weekend.

Back in 2011, three UNF/FSU students envisioned a non-profit that would supply much-needed clean water to third world countries.

Today, after visioning trips and well-water building experience, Water for All Nations is operating with a global board of directors, and co-founder Ryan Winter is moving from Jacksonville to Tanzania later this month to begin implementing its mission.