Many South Floridians know the suave, summertime vibe of Jimmy Buffett’s ‘Margaritaville,’ which he wrote over 40 years ago on his way down to Key West.

But fewer  know about Buffett’s passion for environmental activism - especially for Florida’s ecosystem. His message to protect it reached over five thousand Parrotheads in the Hollywood ArtsPark Ampitheater Thursday night.

As beach balls flew carelessly above dancing couples, young and old, it was there that Buffett took a political stance and supported candidate for Florida governor Gwen Graham with this concert, called ‘Get Out The Vote.’

“It’s just pretty simple, we live in paradise, and paradise is in peril,” Buffett said after walking onstage and hugging Graham. 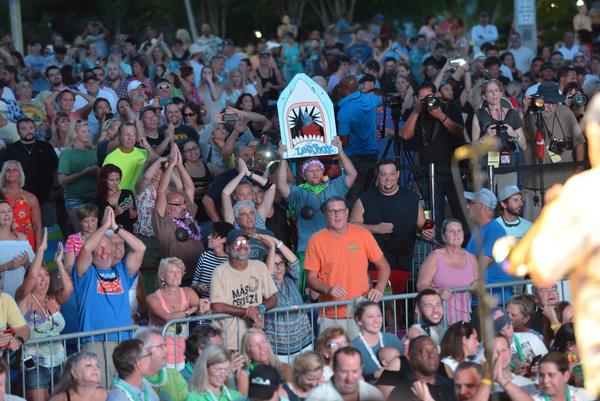 Then he hoisted his guitar over his shoulder and bumbled out, “that’s about as political as I’ll get - in the meantime, I’m here to have a little fun, how about y’all?” 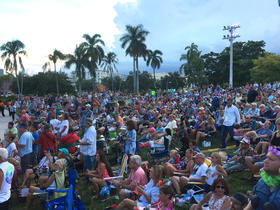 But behind the cheers and carefree sways, there was an interesting political mix in the crowd, according to 30-year-old Brendan Walsh, who lives around the corner from the theater. He came to the concert with 32-year-old Mukethe Kawinzi, who thought the event would be more politically integrated.

“We believe that Jimmy Buffett attracts a specifically older, white Republican audience, so it’s interesting that it is Jimmy Buffett who is aligned with a Democratic candidate for governor,” Walsh said. “So that’s essentially what we’ve been talking about all day.”

Kawinzi said it’s great for candidates to have an event that isn’t obviously political to the crowd - but if Graham is going for name recognition at the polls, she said, this is an interesting tactic.

“I think anything that allows me to engage more directly with local candidates, absolutely has influenced my vote, and we’ve made an effort to go out to various events surrounding some of the local races,” Kawinzi said. “Something that’s more different, something that brings out a different crowd, I think is absolutely, anything for voter engagement I think is positive.”

Efforts like this Buffett concert seem to be working for Graham.

According to recent polls from Florida Atlantic University, Graham’s support has grown from 15 percent in May to a 29 percent spike this month. Trailing Graham with 17 percent of Democratic primary votes is former Miami Beach Mayor Philip Levine. The FAU poll shows candidates Andrew Gillum and Jeff Greene are tied for third at 11 percent, and Christopher King holds 10 percent. 19 percent of voters were undecided.

Still, others in the crowd said they just showed-up for Jimmy Buffett.

“Definitely Jimmy Buffett, and South Florida and the ecosystem and nature and all the vibes he brings really bring people together for the better,” William Urban II said, swaying to the music and wearing a laid-back tropical print. He said he can’t wait to retire in Margaritaville.

“It’s like paradise, you know, he really represents that feeling. This was a really smart move.”

Gubernatorial candidates are making their final pitches to voters ahead of Tuesday’s primary. Democrat Gwen Graham returned to Tallahassee Thursday to vote and rally her supporters amid polls showing Graham and Phil Levine tied as front-runners to win the Democratic Gubernatorial primary.

Gwen Graham Tries To Make History In Her Bid For Governor

This is one of a series of profiles on the major candidates for Florida governor that we're running through the Aug. 28 primary election.

With the primary elections almost exactly a month away, a poll released Friday shows Democrat Gwen Graham and Republican Ron DeSantis as the front-runners in the race to replace Gov. Rick Scott.

WJCT News has put together a Voter's Guide with precinct finders, candidate profiles, election news and other resources that voters can utilize before heading to the polls.