This week, PBS is launching a new documentary series, "180 Days."

One of the films focuses on Hartsville, South Carolina, a rural and poor district which has managed to become one of the highest rated school districts, according to South Carolina's ranking.

Tampa public media station WUSF hosted a town hall meeting at Artz 4 Life Academy in Clearwater last week to screen a portion of the movie and to discuss education issues. Artz 4 Life is an after-school arts and life coaching program.

Listen
Listening...
/
Listen to the story.

Big on the mind of those who attended was Florida's new test, the Florida Standards Assessments. The test is linked to Florida's new Common Core-based math and language arts standards, which outline what students should know by the end of each grade.

But parents were worried the new test is expected to be tougher and must be taken on a computer.

"We went from FCAT to FSA, and that’s worse than what we were already at," said mom of three Lisa Hewitt. "We set our students up to fail… If they weren’t doing so well in FCAT, why would we develop another test that’s worse?

"And most of my students – my fifth grade student – is going to be taking that on a computer that he doesn’t really even know how to operate.”

School choice was also a top concern -- some parents wanted access to better arts program -- and a reduction in the number of days of physical education classes or recess time.

StateImpact Florida was on the panel at the town hall. Listen to the excerpted version of the discussion.

And to learn more about "180 Days: Hartsville," click here. 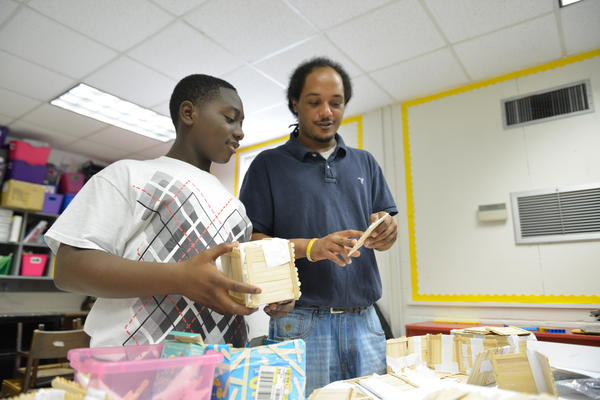 Ready Or Not, Students, The New Florida Exam Is Here

Two students are recording the daily announcements, telling classmates when and where they need to be starting today.

"Monday is ninth graders, with last name A to G," one student raps, in a rhyme that's no threat to Miami's Rick Ross.

Stewart’s letter is a response to questions from senators as they prepare for the upcoming legislative session. Senators wanted to know if students could opt out of state-required exams and how doing so might affect their progress in school.

A proposal to limit students to 45 hours of testing a year is unlikely to reduce the amount of time spent on exams, according to a survey of Florida's largest school districts.

Performance funding in public higher education is a way for states to hold institutions accountable for certain outcomes. But new research shows it doesn’t do much to keep students enrolled or boost graduation rates.

New Book Looks At The History And Future Of Testing In U.S. Schools

Lots of people think there’s too much testing going on in schools right now. It’s one of the most contentious issues in education.

But at the same time, Florida is rolling out a new test tied to new math and language arts standards -- known as Common Core.

NPR education reporter Anya Kamenetz researched the history and use of standardized exams for her book, “The Test.”

Read an edited version of our interview with Kamenetz below.