Florida State University is suspending all of its fraternities and sororities indefinitely after the recent death of a fraternity pledge and the arrest of a member for selling drugs. 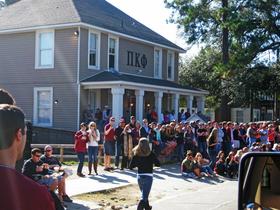 The organizations are now banned from holding formal activities including participating in homecoming, pledging or hosting official meetings. Members will still be allowed to live in their homes. Florida State University President John Thrasher says the move is meant to send a message to Greek organizations.

“We’ve got a serious problem and we’ve got to deal with it. And they’re part of the solution. And the sooner they can come to the table and we can all talk and find those solutions, the sooner this will be lifted," he said.

“Investigators have interviewed more than 50 people and many additional interviews are planned," TPD Chief Michael DeLeo said Monday in a video posted to the department's facebook page. "Although there are indicators that alcohol may have been a factor in this case, we are waiting for the results of an autopsy, so no cause of death has been determined.”

In a separate and unrelated case, fraternity member Garret Marcy of Phi Delta Theta, was charged with selling drugs. FSU's Thrasher says the ban on Greek life will stay until there is a new culture in place for the organizations.

“I just feel like for whatever reason the message isn’t getting through. And I want to take a pause and let’s reflect on what we need to do about the culture of Florida State University.”

During the past five years several FSU fraternities have been the targets of investigations into hazing, sexual assault and bad behavior.