Saturday, April 20, marks the third anniversary of the Deepwater Horizon oil rig explosion. The accident killed 11 workers and released nearly 5 million barrels of oil into the Gulf of Mexico. But efforts to restore the gulf are far from over.

A new report by the federal Oil Spill Commission gives Congress a D-plus for its handling of the ongoing cleanup.

Earlier today, lawmakers, scientists and environmental advocates teamed up for a press conference at Demens Landing Park in downtown St. Petersburg. Among them was Democratic Congresswoman Kathy Castor of Tampa, who last year helped pass legislation aimed at getting Florida's economy back on its feet after the spill. 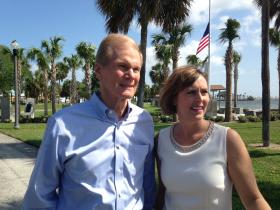 "The reason we had a D and not an F was because we were able to join forces and pass the Restore Act that devotes 80 percent of the fines and penalties to gulf coast restoration," Castor said.

New legislation filed by Castor and U.S. Sen. Bill Nelson (D-Fl.) would take the Restore Act a step further by increasing oil companies' negligence liability from $75 million to unlimited in the event of another spill.