Business Brief: Catch A Live Show While They're In Season

Editor's note: This article has been updated from its original version.

Fans of live music, comedy and theater might have noticed the bulk of acts come through Northeast Florida toward the beginning of the year.

More shows are brought to Florida during the months of  January through early spring. According to Burr, a factor to having more performances during these months is simply due to the Florida climate this time of year.

“To give you an example, a show like Phantom of the Opera has 16 to 18, 53-foot trucks and you could see what could happen if a major snow storm would delay them arriving,” he said.

However, St. Augustine Amphitheatre General Manager Ryan Murphy said that while many people prefer this cooler part of the year, some acts welcome the heat.

“A lot of these bands — (like) Death Cab for Cutie — ... that are coming through, they have no adversity to playing outdoors in the summer," he said. "In fact, a lot of times the heat, the sweatiness, the rowdiness of the show is actually part of it.”

Regardless of the weather conditions, Russos and Murphy said it’s important to establish a strong reputation for your venue. Murphy recalls how he got Stevie Nicks to play at the Amphitheatre.

“Tony Bennett’s management, friends with Stevie Nick’s management after Tony Bennett played said you got to go there," he said. "Those guys are great, it’s a great time.

"A month later, they were calling me saying hey we're looking to lock in date with Stevie Nicks.”

While summer is approaching, fans should not be discouraged because there is still a substantial number of acts lined up for the upcoming months. 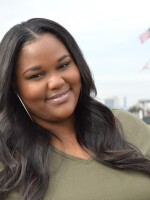 Farryn James
Farryn James is a senior at the University of North Florida majoring in communications with a concentration in multimedia journalism. Born and raised in Jacksonville, Farryn returned to school after five years working in the Jacksonville Public Library system.
See stories by Farryn James
Latest Stories
Related Content