Baseball’s never been hotter with the Jacksonville — Jumbo Shrimp?

Jacksonville’s minor league baseball team is changing its name from the Suns to the Jumbo Shrimp.

When team owner Ken Babby took over last year, he immediately began the process of rebranding the decades-old team. He unveiled the new logo and uniforms Wednesday morning downtown.

General Manager Harold Craw said the new mascot is a natural fit for the community.

“Obviously being from the South and then obviously living on the coast, there is an identity that you would do with eating and having a good time and enjoying yourself,” Craw said. “Obviously that’s what we all do when we come to a baseball game.”

The social media reaction to the name change has been swift and often negative.

A Change.org petition asking Babby to change the name back to the Suns gained more than 3,000 supporters within four hours Wednesday.

But Babby is no stranger to whimsical name changes. He changed his other team’s name to the Akron RubberDucks, and, as the Times-Union reported, that team’s attendance increased by nearly a third over three years.

“We recognize that change is difficult and that’s OK," he said Wednesday morning. "We’re not closing the door on the history of great minor league baseball in Jacksonville: the championships, the great players, the ballpark. Those are all part of our evolution, and this is just a new chapter in what makes minor league baseball really special in our community.”

Babby says the new name aligns more with the fun atmosphere of Jacksonville and its location on the St. Johns River.

The Jacksonville Jumbo Shrimp are expected to take the field with their new name in April of 2017.

Jessica Palombo
Jessica Palombo supervises local news gathering and production, podcasts and web editorial content for WJCT News, ADAPT and Jacksonville Today. She is an award-winning writer and journalist with bylines including NPR, Experience Magazine, and The Gainesville Sun. She has a master’s degree in broadcast and digital journalism from Syracuse University and is an alumna of the University of Florida. A nearly lifelong resident of Jacksonville, she considers herself lucky to be raising her own children in her hometown. Follow Jessica Palombo on Twitter: @JaxJessicaP
See stories by Jessica Palombo 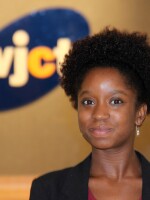