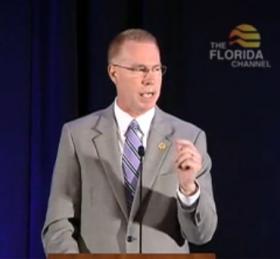 Florida has the third largest prison system in the country, housing about 101,000 inmates. Of those, about 48 percent are black.

That's just some of the stats Crews mentioned at the recent 29th Annual National Conference on Preventing Crime in the Black Community, which took place in Jacksonville.

But, Crews says that’s not the most troubling one.

“There was some good data, but honestly, there was one that stood out like a sore thumb. We can confirm and we know about 64,000 children and youth in this state who have at least one incarcerated parent. And, that’s just the ones that we know about,” added Crews.

Crews says his goal is to build upon his predecessor’s successes and reduce the state’s recidivism rate, or the number of inmates who were released and within three years came back to prison.

“But, I say we’ve got to rethink things on how and what we do in the Department of Corrections. We can’t just be warehouse. And, we have a responsibility to make sure that individuals who are incarcerated with us, that when they are released, we have done everything that we possibly can to successfully enter back into society,” continued Crews.

According to Crews, about 87 percent of those in prison will be released at some point. And, about 150,000 are currently under some sort of community supervision.

Meanwhile, a nationwide study by the Pew Charitable Trusts finds that Florida leads the nation with the highest number of inmates released to their communities without any supervision, after they served their full sentence. The research further showed that’s when offenders are at the greatest risk of committing new crimes. Under Florida law, most offenders are required to serve at least 85 percent of their prison sentence.

Study: Florida Leads Nation In Inmates Who 'Max Out' Sentences

TALLAHASSEE (The News Service of Florida) — A new study by the Pew Charitable Trusts finds Florida leading the nation in inmates who “max out” their sentences — serving 100 percent of their time and being released with no supervision beyond the prison gates.

A new peer-reviewed study finds that inmates leaving prison have used the power of spirituality successfully to avoid going back to a life of crime.

The New Republic has published photos from the autopsy of Angel Diaz, whose botched execution by lethal injection in 2006 prompted then Florida Governor Jeb Bush to issue a moratorium on executions. DISCLAIMER: The link below contains graphic images.