The Gulf Coast of Florida is already feeling impacts of Hurricane Michael with minor coastal flooding due to storm surge and high tide.

Flooding and some street closures have been reported in several Tampa Bay area cities and counties, including: 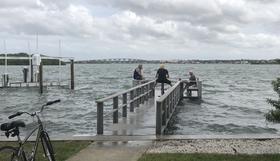 Donnie Browning, who lives on Belleair Beach in Pinellas County, said the tide Tuesday afternoon was at least "a couple feet higher" than it was yesterday. He was amazed at how high the water was - inches from the top of the seawall washing over the dock - considering Hurricane Michael is hundreds of miles away.

"It's an awesome display of Mother Nature...she does what she wants to," Browning said.

At a press conference in Citrus County Tuesday afternoon, Governor Rick Scott said the storm is expected to intensify as it approaches Florida's panhandle.

"They're anticipating storm surge of up to 8 to 12 feet between Indian Pass and Gulf County and Cedar Key and Levy County,” he said. “That means the water is going to come in and come miles inshore and could easily rise above the roofs of houses. We expect to see up to 12 inches of rain in some areas of the Panhandle. That's going to mean you're gonna get flooding."

Scott also warned that areas to the south will likely feel the effects of Hurricane Michael. He said Tampa Bay could experience up to six feet of storm surge and heavy winds.

Most of the Tampa Bay area remains under a Tropical Storm Watch and Storm Surge Watch.  Emergency management officials in Pasco County are recommending voluntary evacuations for people living West of U.S 19, and in coastal zone levels A and B in Hernando County. (Click here for a county-by-county guide to evacuation zones.)