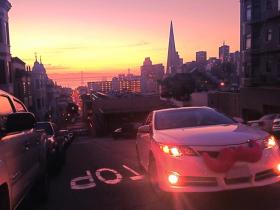 Drivers for a new ride-sharing service, Lyft, are now facing significant fines and penalties from Miami-Dade County. The service has been around for about two weeks now, but it's operating illegally.

The fines don't seem to be scaring off Uber, the company that faced opposition from county officials last year. Wednesday, Uber plans to launch a service similar to Lyft, UberX, and will offer free rides through June 20.

But Miami-Dade County code requires anyone wanting to provide for-hire taxicab services to get a taxicab license. For-hire transportation is licensed and regulated to make sure vehicles are fit to be on the streets. It also assures the safety of passengers.

Lyft is against the law in Miami-Dade because it's operating outside of county code. Diego Feliciano, president of the South Florida Taxicab Association, is not happy the app-based service was able to come to Miami.

He says it's not fair Lyft drivers get away with not paying all of the necessary fees that taxicab drivers are subject to. Miami-Dade Mayor Carlos Gimenez told WLRN he supports the service.

"I think that the technology is great and that it is bringing us into the 21st Century," Gimenez said. But he also said, "I have to make sure that our code is followed... and so we are enforcing our code right now."

Brian Lyew is a driver for Lyft. He is in Miami for a summer internship. He needed extra income, so he applied for a job with Lyft after he saw an ad on Craigslist.

Lyew says he did not know Lyft was operating out of code. That's why he was surprised when he got fined a total of $2,020 last week at Bayside Marketplace in downtown Miami.

"I wasn't really aware that [Lyft was against the law]," he says. "Maybe I should have, but you know, I didn't read any Florida statutes beforehand... I didn't know that was a requirement to sign up for a job."

The violation on Lyew's citation reads: "Failure to obtain a Miami Dade chauffeur reg. as required by code."

Mayor Gimenez says the codes are outdated but they still need to be enforced.

Elaine Chen contributed to this report.

Miami's beer makers have officially unionized. Sort of. The owners of two Miami-Dade County breweries rallied their brewer colleagues to form the Miami Brewers Alliance, a sort of advocacy and education group for local craft-beer businesses.

Electric cars are no longer a thing of the future. More people are driving plug-in cars, even in Jacksonville.