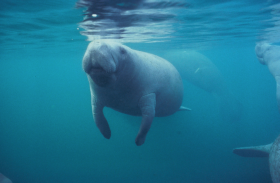 Manatees have been an endangered species since 1967. But on Tuesday, the U.S. Fish and Wildlife Service made an announcement that this classification may soon be lowered to "threatened."

But some environmentalists and government officials are opposed to this change. They say changing the label might result in more lenient rules about boat speed zones and dock-building limits.

The U.S. Fish and Wildlife Service says the population of manatees has increased or remained stable-- a fact that helps justify their decision, the Sun Sentinel reports. They also say boating accidents, collisions and red tide have been reduced, improving the overall safety of the creatures.

Lowering the classification will not have any immediate impact on these rules, but opponents are still concerned the level of protection for manatees will suffer as a result of the re-classification.

The preliminary decision by the U.S. Fish and Wildlife Service was made after a petition sent out by the Pacific Legal Foundation. The group works to protect property rights and reduce business regulations. Last year, the wood stork was lowered from endangered to threatened because of the group's efforts.

The Florida Fish and Wildlife Conservation Commission gave final approval Wednesday to a ban on imports of lionfish to Florida.