The University of South Florida Muma College of Business is home to a new laboratory that doesn’t consist of beakers and microscopes. Instead, it’s a high-tech virtual lab where students are learning the latest techniques in the fast-evolving, fast-growing world of cybersecurity.

Thirty-five students are members of the first group of a four-week intensive training program launched earlier this month called the ReliaQuest Cybersecurity Labs at the USF Muma College of Business.

Brian Murphy is founder and CEO of Tampa-based enterprise security provider ReliaQuest. He said since cybersecurity is such a rapidly evolving field, the lab at USF will focus on skills that change with the industry.

“We don’t teach a technology, we teach a way to approach a problem and we teach an understanding of what’s happening in the background, so as the technology changes, we can evolve along with it,” Murphy said. 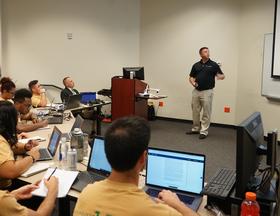 While USF faculty help in the training, so do engineers and instructional designers from ReliaQuest.

“Our teams love coming here to work with the students and they love feeling like they’re giving back and part of that knowledge transfer, you learn as much as you teach,” said Murphy. “The more you teach something, the better you get at that something, and so our team’s really excited and there’s an unlimited number of volunteers that want to come participate in the program.”

The students will be learning on ReliaQuest’s innovative Cyber Simulator, which puts them in real-world cyber environments – replicating a business with thousands of store locations or a bank with hundreds of branches.

“We’re going to teach the students how data moves through those architectures and what sensitive data is, what sensitive data isn’t, so they can actually get their hands on it and see it and then as well as manipulate our ability to visualize that data and then start to do some basic analysis and understand why we analyze the things that we do,” said Murphy.

It’s the same technology used in the company’s ReliaQuest University, the weeks-long training program its new employees have to go through.

Murphy started his company more than a decade ago with three colleagues in a tiny, 200-square-foot office. Now, more than 300 employees work in offices in Tampa, Las Vegas and Dublin, Ireland.

That growth has allowed ReliaQuest to cover the students’ cost for the training program with a $1 million gift spread out over five years. Murphy says that’s money well spent to address the massive need for a skilled cybersecurity workforce.

“These are high-paying jobs, they’re constantly being expanded and evolved from organizations of all sizes, so this is a future career path that you can get into in technology and always have gainful employment and always have an ability to learn more and face new challenges,” said Murphy.

USF officials cite an Occupational Outlook published by the U.S. Department of Labor's Bureau of Labor Statistics that showed that in 2016, there were 100,000 information security analyst jobs. In addition, the demand for analysts is expected to grow by 28 percent over the foreseeable future.

The program is open to all USF students, no matter their major or campus. Graduates will be invited to interview for a position at ReliaQuest – music to the ears of some of the students in the inaugural group.

“I hope to come out of this already ahead of a lot of other students that are also in the same place as me and the same major,” said junior Desiree Dixon. “And hopefully as soon as I graduate, I’ll have multiple companies also interested in me.” 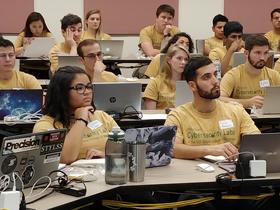 “That is the main reason why I’m here – I see this as my opportunity to get into cybersecurity,” said classmate Luis Fonseca.

“I saw their culture, it was amazing,” he said. “For them to be able to be here and instruct us the same way they would instruct their new hires says that we have been given an awesome opportunity.”

While the students are indeed learning on the company’s technology, Muma College of Business Dean Moez Limayem pointed out the skills they’re picking up are universal.

“You know, hacking is hacking,” said Limayem. “The hacking, the techniques, the foundations are the same. So once they learn these techniques, they can go and apply them with any other cybersecurity company or even any business, any bank, any retail company.”

Murphy agreed, saying they’re free to take what they learn anywhere they want to work.

“I do believe that cybersecurity is a community, we need to quit looking at it as this pure capitalistic view and (instead view) security as a team sport – we have to work together and if we all get a little bit better and we already do all of the sharing as an industry, so this is just another way we share,” he said.

Limayem added that partnerships like this four-week boot camp are just one way USF is rethinking the role of a business college in the 21st century.

“Things change very fast, so we have to supplement that with other training, with hands-on opportunities, with the latest techniques from industry,” said Limayem. “Where the classroom education is no longer enough, where things by the time students graduate in four years already the knowledge is beyond them – we’re trying to be at the cutting edge.”