Students who are the first in their family to attend college often have a more difficult time finishing their degree.

Research shows those students know less about how to get into and pay for college. They're also less likely to take tough high school courses needed to prepare for college.

Documentary filmmaker Adam Fenderson spent three years following a group of first-generation students through high school as they prepared for college. His film is called "First Generation." It will be screened in Miami this week.

Hear and read an interview with Fenderson below.

Listen
Listening...
/
Filmmaker Adam Fenderson talks with StateImpact Florida about what he learned while filming a documentary about students who are the first in their family to attend college.

What’s the biggest hurdle for first-generation college students? Is it cost?

The idea of cost is probably what everyone thinks of. That’s the first thing that pops into people’s head.

But the truth is, for low-income students, money should not be the biggest barrier because there is so much money out there with scholarships and grants. Just filling out the FAFSA [Free Application for Federal Student Aid] is going to help students along the way dramatically.

So I don’t think that the largest barrier is financial, but the reason why most people say that is because that’s what you hear in the media.

I think that the number one barrier is the information gap. It’s that these students don’t know that there are free colleges out there. And I think without the right information, these students are falling behind and not being able to reach the same potential as their wealthier peers. 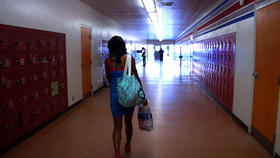 What did you kind of think you knew about this subject coming in to make the documentary, and did that change along the way?

Something that surprised me – but I look back and I really shouldn’t have been surprised – the truth is we saw these students getting bad information throughout the course of filming.

And they were getting information from their peers and from their parents and even sometimes from their counselors who were just misinformed. And they just took every bit of information they got as fact.

But if you’re not getting other information, if you‘re just taking whatever you hear first as fact, you’re closing doors.

If you have one piece of advice to give to someone seeking to be the first from their family to go and graduate from college, where would you tell them to start, or what do you think is the best resource for them to look at?

The first thing I would tell any first-generation college student would be to ask questions. Anything you want to know, find someone that can answer those questions and ask them.

I think that would be the number-one thing that I would urge students to do: Just ask questions. And ask them early.  For students out there that are in eighth grade, seventh grade, ninth grade – that’s when you really need to start. You need to start asking questions right then to make sure you’re on track all four years of high school.

Join StateImpact Florida for a free screening and discussion of "First Generation" Tuesday, Dec. 9 at 6 p.m. at O Cinema in Miami Shores. To learn more about the movie, to register for Tuesday's screening or find another showing, check out FirstGenerationFilm.com.

This spring, Florida students will take a brand new test tied to the state’s new math, reading and writing standards.

This is the test that replaces the FCAT. It's known as the Florida Standards Assessment, and it’ll be online.

What’s on the test won’t be the only thing different about the exam. Students will also find new types of questions.

Ryan Seashore starts off every CodeNow workshop with a simple request — write out step-by-step instructions for making a peanut butter and jelly sandwich.

How A Federal Program Will Help Florida Schools Go Wireless

Florida schools are in the middle of a high-tech transformation.

A national foundation thinks school principals have more to learn.

Students and civil rights activists are still asking Florida to hold black and Hispanic students to a higher standard.