Gov. Ron DeSantis made a stop at Destin Elementary Wednesday afternoon to announce a statewide bonus for teachers and principals as well as tout the state’s plan to open schools for in-person instruction.

“When the history is written on this recent chapter, I think people are going to look back and say probably the most important thing we did here was get the kids in school,” the governor said surrounded by local officials.

Last July, the state’s Education Commissioner Richard Corcoran ordered public schools to reopen in August at least five days a week and provide all services required by law. Parents had the option to choose at-home learning. A lawsuit from the Florida Education Association, joined by parents and teachers, quickly followed. Gov. DeSantis was undeterred.

DeSantis blamed the overall national narrative and “corporate media” for fearmongering pushing the narrative that schools should be closed.

“Think of all the lives that have been affected negatively because of politics, cowardice, flat earth science you name it — it’s been a total disaster in certain parts of our country,” he said. “I think people are going to rue the day that they didn’t get kids back in school. I think you’re going to see long-term damage.”

In Okaloosa County, DeSantis said — and was backed up by Superintendent Marcus Chambers — that more than 90% of students are enrolled in brick-and-mortar school.

Reopening schools was met with challenges on the district level as officials worked to provide safety guidelines. Okaloosa County’s school board held a seven-hour emergency meeting days before school started on a possible mask policy. The end result was a strong recommendation.

According to report published in March from the CDC, Florida schools had a total of 63,654 reported COVID-19 cases from August 10 to December 21, an estimated 60% of those cases were not school related. Higher rates were among students in small districts, districts without mandatory mask-use policies, and districts with a lower proportion of students participating in remote learning.

According to the CDC, the report findings suggest that school openings can be safe and not result in widespread illness among students. Vaccine eligibility also makes a big difference. In Florida, nearly 70,000 children aged 12-14 have had their first dose of the COVID vaccine.

Destin Elementary teachers for their part said they appreciated the flexibility to return to the classroom.

Third-grade teacher and STEM coach Amber Wall thanked the governor for “taking the heat” when it came to reopening schools.

“As a single parent I’m thankful I had the option to keep my daughter in school so she could complete VPK and I could continue working,” she said.

Fourth-grade teacher Diane Kelly said she was happy that she could spend her last year teaching “here in my school with my students in my classroom.”

Second-grade teacher Lisa Brown said she saw a “noticeable regression” in her students after months of online learning. This school year was better academically.

“I can confidently, proudly say without a doubt my second graders are prepared for third grade,” she said. “I don’t think that outcome would be the same without the opportunity to see my students face to face to bridge that gap.”

“We need to show some appreciation,” he said. “When I do sign the budget very soon that budget will include $1,000 bonuses for every principal and teacher in the state of Florida.”

DeSantis explained teacher compensation was a big issue for his administration before the COVID pandemic. Last year, he signed a bill dedicating $500 million of the state’s budget to raising teacher salaries and said the work isn’t done.

In 60 of 67 counties, teacher compensation is over $40,000, DeSantis said. He also noted that nationwide, only 12% of counties can say the same. 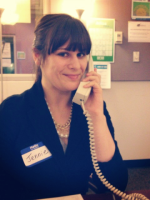 Jennie McKeon
Jennie joined WUWF in 2018 as the digital content producer and reporter. After graduating from University of West Florida in 2009 with a B.A. in Communication Arts/Journalism, she worked for print publications across Northwest Florida including InWeekly, The Destin Log and Northwest Florida Daily News. In 2016, she was named Features Writer of the Year by Gatehouse Media. Born in Pennsylvania, she admits to being a "Yankee who drinks sweet tea." She dislikes cold weather and is happy to trade a white Christmas for 75-degree weather anytime. She's a proud volunteer of Gulf Coast Kid's House and Save Our Cats and Kittens (SOCKS) in Fort Walton Beach. When she's not reading or listening to podcasts, she enjoys photography, 80s movies, re-watching "The Office" and looking at pictures of your cats.
See stories by Jennie McKeon
Latest Stories
Related Content