In our Generation W Profiles series, we highlight influential women.

Kelly Wallace is a digital correspondent and editor-at-large for CNN.

Wallace says she was one of the lucky ones who knew what she wanted to be since she was younger: a television reporter.

“But I felt it was almost a dream. The dream job,” she says. “I didn’t necessarily think I can make it happen.”

She says she pursued a business degree and started working in the business side of TV after college, but that only made her want to make her dream into a reality.

Wallace said she started as an associate producer with CNN and was promoted to producer before she sent out her resume tapes to stations around the country, which led her to a station in Albuquerque, New Mexico, where she took the biggest step in her career towards her dream job.

“I always tell people you’re going to face setbacks and challenges, and the key is what you do when you are faced with them,” she says.

“The main challenge I have faced in my career is when I have wanted to do something, and it wasn’t quite happening,” shes says.

Wallace says she often debated whether she was comfortable enough in taking a risk and going somewhere else where it might not work out.

“But at least I have a better chance of doing what I want to do," she would tell herself.

Wallace says she thinks it is very important for women to help each other.

“To me, it’s the whole thing of paying it forward,” she says. “I just take every chance I can to help other women who are up and coming, both to talk about my own experiences and also to see if I can help open doors for them.” 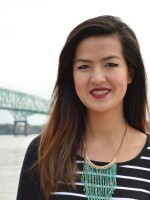