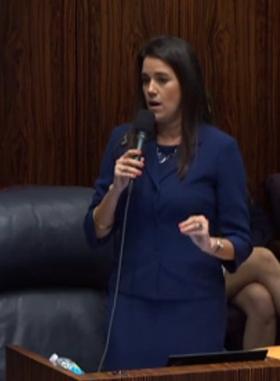 A controversial abortion bill is now headed to the Governor, after receiving final passage from the Florida Senate Friday.

“This bill requires that the informed consent that is required to be given to a woman prior to having an abortion…that that informed consent be done 24 hours prior to her receiving that abortion,” said Sen. Anitere Flores (R-Miami), the bill's sponsor.

A day earlier, Senate Democrats tried and failed to make changes to the bill. That included putting a 24-hour waiting period in place for vasectomies by Sen. Gwen Margolis (D-Miami).

“If a man has a vasectomy, that he too has to have a 24-hour notice, get lectured, go through the same process as a women does—it’s as simple as that. It’s what’s good for the goose is good for the gander,” said Margolis.

And, that failed amendment was met with a joking response from Sen. Greg Evers (R-Baker).

“Senator Margolis, would you accept an amendment on that makes the requirement that a man has to wait 40 years before he has one of those,” asked Evers, to laughter.

By requiring the 24-hour waiting period, it means a woman would be required to make two visits. A new change in the bill exempts women who are victims of rape, incest, domestic violence, and human trafficking.

But, Sen. Geraldine Thompson (D-Orlando) tried to add another exemption.

“…or when on the basis of a physician’s good faith clinical judgment, there’s a risk to the woman’s health or the presence of a severe fetal anomaly incompatible with sustainable life,” said Thompson.

“What you would be saying is that if there is a chance that your baby may be born with some sort of anomaly here—call it ailment or whatever it is—then you’ve made the decision that that life just isn’t worth it, and that’s something that I could definitely not support,” responded Flores.

Flores’ bill also comes with a condition that those exempt must provide documentation, like a police report or a restraining order—which has been met with much opposition. That includes Sen. Jeff Clemens (D-Lake Worth), who failed to try to do away with that provision.

“This is not a hostile bill to women. It is putting women at the same level of everybody else, and it’s making sure that we have the same standard for women as we do for every other medical procedure. And, that there’s not a business, the business of abortion trying to take advantage of women and trying to play on their emotion and talk them into something that they make money on and you spend the rest of your life regretting. I want to make sure that a woman has the time to sit back and reflect and then make that informed decision,” said Flores.

That's not a view not shared by Senate Democratic Leader Arthenia Joyner (D-Tampa).

“This bill is hostile to women,” Joyner fired back. “This is the only medical procedure that we mandate that a person, specifically a woman, has to go back home and decide, ‘oh, did I make the right decision?’ Well, let me tell you, in a procedure this important, no woman wakes up and says, ‘oh, I’ll have an abortion, tomorrow.’ They thought about it.”

Sharing a personal story, bill co-sponsor Sen. Don Gaetz (R-Niceville)—who says he’s never debated an abortion bill in his nine-year tenure—felt he had to this time.

He spoke about his wife Vicky, who’s been paralyzed for about 30 years—due to a rare complication that occurred when she was pregnant with their second child.

“She had had an unexplained spinal cord injury, and the doctors told me that she would probably die,” said Gaetz. “She was four months pregnant.”

Gaetz says his wife was then told to consider having an abortion, since time was of the essence.

“So, she thought about,” he continued. “I think for a day or two, and then she came back and said, ‘I’m going to live, and my baby’s going to live.’ And, today, our daughter—that baby is 29-year-old Network Television Producer in New York and she calls her mother every single day.”

And, bill sponsor, Flores, says that’s what this bill is all about.

“If all that this bill does is have one woman—just one—after some time of reflection, after some time of thought, say, ‘I’m going to make the decision to have this baby,’ I will consider that a huge success,” said Flores.

And, the measure passed the Senate 26-13 with Democrats opposed. The measure will now head to Governor Rick Scott.

The Florida House on Tuesday joined the Senate in moving forward with a bill that would require a 24-hour waiting period for women seeking abortions.

The full House is expected to vote Wednesday on the measure (HB 633), while the Senate version (SB 724) is poised to go to the Senate floor Thursday.

Like the Senate bill, which passed the Senate Fiscal Policy Committee on Monday, the House bill was amended to include exceptions for women who are victims of rape, incest, domestic violence or human trafficking.

The Senate unanimously approved legislation Wednesday revamping how local pensions for police officers and firefighters are funded, bringing closer to resolution a long-running debate over the retirement plans.

The bill (SB 172), which now heads to the House, cleared the upper chamber 36-0 after less than 10 minutes of debate. It relies on a deal struck between cities and unions last year &mdash one that cities have backed away from after the re-election of Gov. Rick Scott in November.

The Chairwoman of the Democratic National Committee and a Florida lawmaker are joining forces to speak out against two-abortion related bills that cleared the Florida Legislature this year and are awaiting Governor Rick Scott’s signature.