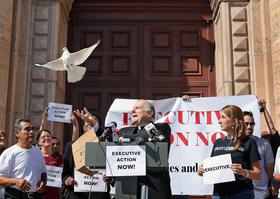 The first pope from Latin America is visiting Cuba later this month. Pope Francis will be the third pope to visit the Communist dictatorship since Pope John Paul II visited the nation in 1998.

Accompanying Pope Francis on the trip will be Miami Archbishop Thomas Wenski. Wenski spoke with WLRN about the church's relationship with Cubans. Here are five things we learned:

The church has done a lot of bridge-building since 1998.

Wenski: "The first papal trip in 1998 was very important and it really marks a before and after in the relations of the church in Cuba. At that time, because of so many years of repression, the church had to explain to a lot of Cubans just exactly what a pope was. And now, after two visits of popes...I think the Cuban people have a pretty good idea who the pope is."

Wenski: "That renewal of relations rekindled hope in the Cuban people. And they've received it with great elation."

By building civic institutions, the church is opposing civil rights violations by the Cuban government.

The church is the main, if not the only, institution of civil society that has any independence in Cuba...in gaining space for itself, it hopes that that also creates space for other actors in civil society.

On what to expect Pope Francis to say in Cuba.

Wenski: "He's going to, I think, embrace some of the themes that both Pope John Paul II and Pope Benedict ennuciated in Cuba: open yourself to the world; don't be afraid to open the doors to Christ...Pope Benedict, when he was there, talked about Cuba being as a common house, in which Cubans of all ideologies and beliefs and opinions should be able to live together in harmony and in peace. So he's going to take up those themes."

The pope believes Cubans need to forgive each other:

Wenski: "He's going to really emphasize the need  for reconciliation among the Cuban people. If you're living in Cuba, you've been betrayed by somebody one time or another. And if you're going to build a future of hope, you can't build it on resentments."