The group blocked streets at the intersection of SW 29th Street and 145th Avenue for hours.

One of the protesters was Camila Duarte, who came to the U.S. at age 14 seeking asylum and fleeing violence in Venezuela. 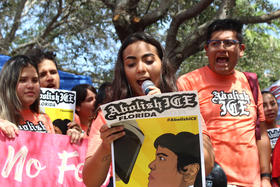 Now she’s a driving force behind the Miami chapter of United We Dream, a youth-led immigrant rights organization.

“We decided to block the street because our lives, immigrant lives, get disrupted every day,” she shouted near the blocked-off intersection, where activists lay in blistering heat for hours.

“These people’s lives need to get disrupted for them to realize that this is happening," she said. "This is our call to attention for the city of Miramar, for the state of Florida, that this cannot keep happening in our town.”

Duarte and others from groups like the National Domestic Workers Alliance, the Florida Immigrant Coalition, the Miami Workers Center and Women Working Together also called on Miramar Mayor Wayne M. Messam to shut down the ICE field office. These protests were also part of nationwide protests mobilizing outside of ICE offices between July 15-24.

They called for an abolition of ICE and demanded an end to the separation of children from families during Trump’s “Zero Tolerance” policy. 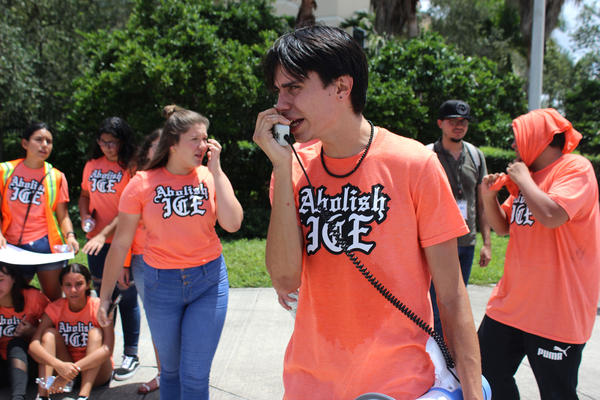 Beginning outside ICE in Miramar, hundreds of immigrant families, activists and coalitions gathered. They then marched to an intersection nearby. As soon as the light turned red, they crossed into the intersection by the hundreds, chanting and carrying banners.

The tactic doesn’t guarantee safety for activists and their families. For the first half hour, the traffic build-up was chaotic and anger manifested into beeping cars and drivers trying to maneuver past the protesters. 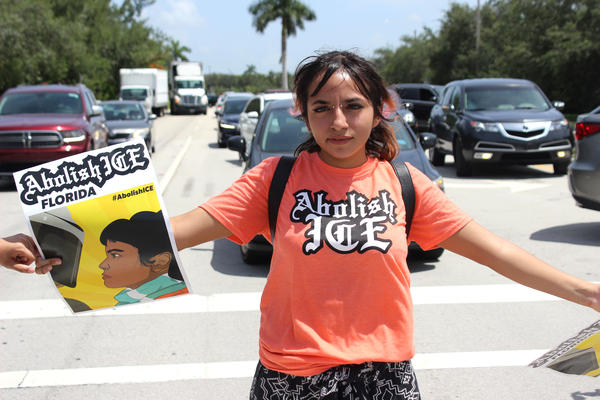 Some tried turning around to drive down the wrong side of the highway, or got into shouting matches with protesters until law enforcement showed up shortly after.

Kendis Bood and other brothers from their Sigma Lambda Beta Fraternity chapter flew all the way from Los Angeles just for this protest. Many were lying in the intersection. 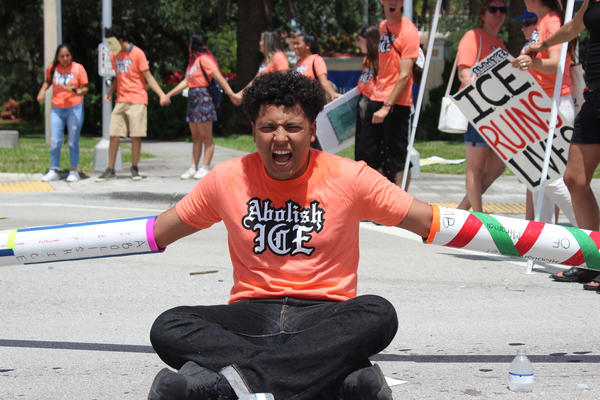 Community member Rose Williams said she has witnessed immigrant families with young children forced to stand in heat for hours without bathrooms or water, waiting to access the ICE building. She took it upon herself to bring water and pass it out.

“I realized people were standing in the hot sun, there were no tents here for moms and babies,” she said. “So I started bringing water about three weeks ago. And every day I go through about two cases of water. It was 96 degrees last week.”

She said last Thursday she met a family waiting from 5 a.m. until noon.

“I’ve been coming here almost a month with water, five days a week,” she said.

Protesters also addressed the over 1,000 migrant children still held in the Homestead complex managed by Comprehensive Health Services. Many of them were separated from their families at the border, and many crossed over alone.